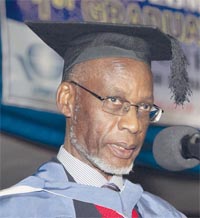 Government has signed a Memorandum Of Understanding (MOU) with stakeholders and eight ministries on the reduction of road fatalities and injuries as per United Nations Decade of action on road safety requirement. Road Transport and Safety Agency (RTSA) Director Zindaba Soko said reducing fatalities  by 50 percent 2011-2020 is a mammoth task and requires multi-sectoral approach.

UNZALARU to hold on to results, students run amok »

THE University of Zambia Lecturers and Researchers Union (UNZALARU) has maintained that lecturers at the institution will not release students’ results until government meet their demands. And the UNZALARU says the money released by government yesterday was far from meeting the union’s expectations. In a telephone interview, UNZALARU secretary general Jason Mwanza charged that results would not be released unless all the controversies surrounding the lecturers are sorted out without fail.

Government to give UNZA and CBU k90 million »

GOVERNMENT will release K90 million to the University of Zambia (UNZA) and Copperbelt University (CBU) as short term solutions to the debt burden incurred by the public universities. Minister of Education, Science, Vocational Training and Early Education Michael Kaingu said at a press briefing yesterday that the http://www.cialisgeneriquefr24.com/ debt burden on public universities had a devastating effect on the operations of the said institutions.

THE Road Development Agency (RDA) has donated equipment and a brand new Toyota land cruiser to the University of Zambia (UNZA). The equipment worth K5.2 million was donated to the school of engineering specifically for the enhancement of the department of environmental and civil engineering. Speaking at the handover ceremony at the UNZA Senate Chamber yesterday, RDA chairperson Samuel Mukupa said the equipment was procured through a loan from the International Development Association of the World Bank.

THE Ministry of Education, Science, Vocational Training and Early Childhood has launched the University of Zambia (UNZA) Graduate School of Business. Minster of Education Michael Kaingu said despite UNZA’s contribution towards training professionals in business courses been limited, he is hopeful that the graduate school will place UNZA in the spotlight in terms of providing quality education in business. Dr. Kaingu said this in a speech read on his behalf by Ministry of Education deputy minister Sydney Mushanga.

THE Human Rights Commission (HRC) has urged the media to facilitate the promotion of human rights and discourage their violation. HRC chief information education officer Mweelwa Muleya said rights such as freedom of expression, association and assembly were paramount especially in view of the forthcoming coming 2016 tripartite elections. Mr. Muleya said the Media was a very important player in good governance despite it being neglected.

The University of Zambia (UNZA) monthly payroll cost is in excess of K30 Million, Minister of Education, Science Vocational Training and Early Education has revealed. Speaking during the inauguration of the caretaker committee of the University yesterday, Dr. Michael Kaingu challenged the caretaker committee to critically interrogate the institution’s internal process.