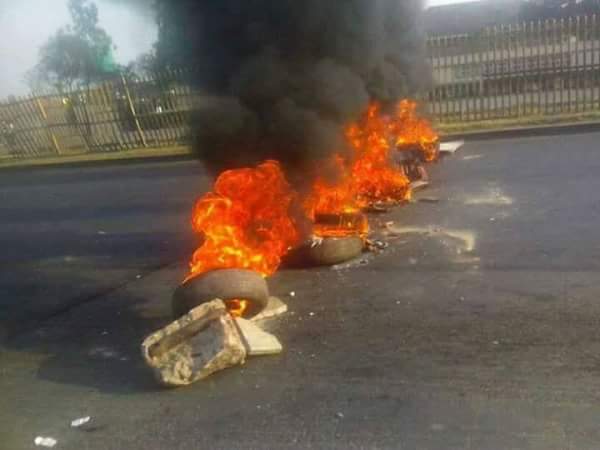 On 28 May, a threefold reason precipitated an all-out demonstration that saw the University of Zambia (UNZA) students thrust into the media’s spotlight. Pending accommodation allowances, the plight of unregistered students and lecturers’ go-slow served as cause for the uprising. For the umpteenth time, a window of tremendous insight into the undulating dealings of government and UNZA students was being swung wide open.

Intermittently, since the 1980s, the relations between the state and the students of the University of Zambia had been an arm-twisting affair. On Sunday, 28th May, the black spots of the two were played out before the media again. For the state, the tendency to delay the dispensation of allowances to students gives rise to riots; for students, riots have been the tried-and-tested means of soliciting from government a positive and urgent response to their needs, wishes and aspirations.

UNZA Red Bag: A student dashes off for home in escape of the riots.

Students have been seething with frustration because their accommodation allowances taken forever to come. As per usual in UNZA, allowances are just about the only hope for holding hunger at bay when the second term gets midway along. The bushels of soya chunks, bags of mealie meal and canisters of oil all run dry. Things get diamond hard when patronage never seems to come by. Government allowances are so much of a gem that they trigger wild scenes of celebration when students get them. In light of this, consternation at the Government’s silence on allowances reached its peak on Sunday night.

Students rounded themselves up for a ‘state of the campus’ address in the Monk Square. Traditionally and notoriously, Monk Square is the venue for ad hoc student indabas. It is the setting for press conferences and meetings that herald road side demonstrations. It is here that the plans for ‘vivas’ _ as riots are known in UNZA _ are drawn up and put forward.

The Monk square does not count as the bastion of primitivism in UNZA. It is viewed as a preservation of state-student interactions, African culture and drama, socialisation and an aid for orientation of freshmen to informal education. The riots it introduces are not an end in themselves, but a means to an end.

Police pounce on students with teargas.

On this eventful day, while drumming pots with spoons and folks, students pooled their energies and came boisterously singing songs of solidarity into the square. It was, viewed from above, a blanket of commotion. Leaders, largely presidential hopefuls and men of towering oratory, ego, courage and charisma, took turns to appeal to the passions of the student mob. It was not all about allowances. Speakers cited two more issues as the rock upon which the imminent demonstration rested.

Firstly, lecturers had gone on go- slow as they did not settled gratuity business with the powers that be. Secondly, students who had not made the second loan list were having their rooms grabbed by the Dean of Students Association (DoSA). These citations came as a boost to the fact that debilitating hunger had invaded campus at government’s tardy release of student allowances. The speakers demonstrated that the resolution to fall back upon a viva was far from gratuitous. With this done, the mob was knit together by baffling unity and a threateningly charged atmosphere pervaded the square. It was time to fix government.

At exactly midnight, students clogged traffic by blocking one of Zambia’s major roads _ the Great East Road. The atrocity sent a ripple of shock-waves into the Government, not to mention law enforcement officers. Police stormed the university with the greatest haste to send scampering the mob of students who jammed the four-lane Great East Road. As expected, the wave of students was not willing to recede at the appearance of riot police, popularly and mockingly known as ‘ba grade seven’ or ‘cousin’. With burning tyres and stones on East Park trolleys, students gave the agents of suppression their first greeting.

Paramilitary officers in full gear to pounce on riotous students.

The police kept their distance and fired tear gas canisters into the resistance of the irate students. They persistently did this as they advanced towards the blazing inferno that brought traffic to a standstill. On the other hand, students responded with the biggest stones police had ever seen, so that a miniature version of the 1990s ChaChaCha riots ensued.

To their credit, police managed to push back the students with a spate of tear gas.  The crowd of students all of a sudden dissolved into running battles back into the campus for refuge. Students could be seen stung in the eyes, groaning, and gasping for breath. While a good few disappeared in the Male Hostels at the Old Residence commonly called the ‘Ruins’, others sought for security at the New Residence. The riot confrontation was taking its toll on Monks and Momas.

Police took care of the road situation and traffic was untangled. They now made their way into campus to lay siege to strongholds. Determination among students was depleting, but there was just enough of it to put up the needful resistance. Police land cruisers were on the prowl around campus to intercept the insufficiently vigilant student. The tar macs were hosting cemetery silence and police were in a treacherous and unstable territory. Students were hiding, but very much on the defensive. It was at this time that a stone displaced a seemingly unsuspecting police officer from one of the cruisers. As if drunk, he lost his balance and gravel cushioned his tumble.

At  about 4 a.m in the morning, the prospect of an uncontrollable situation was declining. This was not the end; students were merely breaking off for a rest.

The demonstrations continued on into Monday afternoon. At exactly 14: 00 hours, the Great East Road was shut down with logs, stones and burning tyres. A multitude of students joined the protests. The tide of hunger was rising and the go-slow was becoming far more real than ever. Further still, unregistered students were seeking redress. There was tension in campus. Students went in full force to attract and court government’s intervention. It seemed they were knocking on a tightly fastened door.

Police arrived at once and the chimes of suppression were ringing. They made way for traffic and set out to fire as much tear gas as they could into the demonstrations. Students answered back with stones, the time-honoured civilian ammunition, once more. It was a back-and-forth confrontation.

This was the sequence of events as they happened. Invariably, the Government has immediately responded through police, whereas all UNZA problems have found their voice in students’ demonstrations. This has been a long tradition.

Even before 1990, right in the days of President Kaunda’s regime, students of UNZA had fought irregularities in this manner.

In 1996, the move by President Chiluba to drum up support for a constitutional change that would provide for a third term in office was challenged by UNZA students.

Thus it has been: in 2013, 2014, 2015, 2016 and now 2017. There has not been a proper documentation of the history of UNZA demonstrations, but almost every government has had to contend with the frustrations and grievances of students. Demonstrations have been in the media as they have happened, except that no attempt has been made at creating a repository for them.

In the recent past, former Ministers of Education like Michael Kaingu and John Phiri had to settle reactions from students with the declaration of indefinite closure and instant compliance. As for Professor Nkandu Luo, the suspension of all UNZASU activities has been equated to formal suppression of demonstrations. The professor has identified UNZASU leadership and its positions as the root of protests after all.

As a counter-response to the Minister’s move, UNZASU issued a press statement signed by the president, Adrian Matole, and the secretary general, Noah Hinyumbwe, to parry the suspension and called the legitimacy of the decision into question.

UNZASU is a pressure group and thus exists to fight for the plight of students. It is a policy-forming body established by an Act of Parliament to stand as an integral part of the university. The union is beyond the borders of campus issues. It goes all the way to fight for national interests, minorities and the hardly heard voices.

Over the years, now and then, the relations between the state and the students of UNZA have been inconsistently friendly. The media have met a source of news in such. Students have never found unstinted indulgence in the state. Neither has any President been without flaws. It has been the perceived role of a national university to fight malfunctions, injustices and poor policies in and from government. UNZA has been doing just that, even though things have not always ended well.