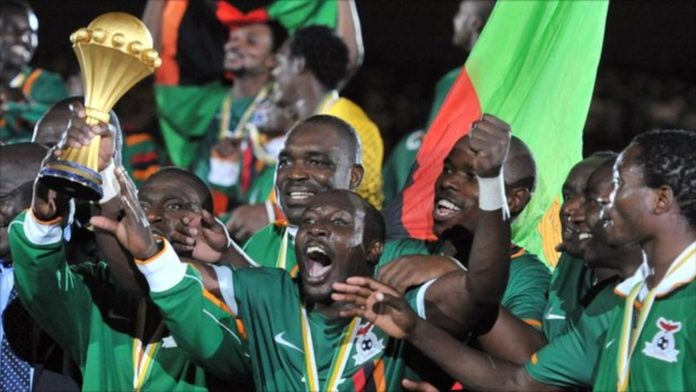 Zambia is a widely respected footballing nation; it has participated in several global and continental competitions such as the African Cup of Nations (AFCON) and the Under-20 World Cup.

The Zambia national football team is governed by the Football Association of Zambia (FAZ). During the 1980s, they were known as the KK-11, named after founding president Dr. Kenneth Kaunda, who ruled Zambia from 1964 to 1991.

The team was later nicknamed “Chipolopolo,” which means the “Copper Bullets,” just after the country adopted multi-party politics in 1990.

On February 12, 2012, the Chipolopolo played a final match against Ivory Coast at the Stade d’Angondjé in Libreville, Gabon, and won 8-7 on penalties.

Furthermore, in 2017, the Zambia Under-20 soccer team survived a heart-stopping encounter when they beat Germany 4-3 after extra-time to progress to their first FIFA U-20 World Cup quarter-final, just few months after bagging the U-20 Africa Cup of Nations.

Zambia also found itself in the news as one of its fallen heroes, Godfrey Chitalu, was among the world record-breaking strikers with more than 100 goals in a calendar year in 1972, more than Gerd Müller’s total of 85 goals and Lionel Messi’s 92 goals  in 2012.

However, Zambian researchers found out that the goals were actually 116 throughout the calendar year.

The researchers also reviewed that, this included 15 goals in the Confederation of African Football (CAF) competitions, 91 goals in FAZ tournaments, 5 goals in friendly games, 3 goals in the National Football League (NFL) Trophy and 2 goals in the NFL Benevolent Fund Match.

The research was presented in the year 2012 after Lionel Messi broke the alleged world record of Gerd Müller.

Nevertheless, a FIFA spokesman declared that an official FIFA world record had never existed as they did not keep track of domestic competitions.

Nonetheless, Chitalu is widely regarded as the greatest Zambian football player of all time as he holds his national team’s goal-scoring record and was voted five times as best player for the national team.

In addition, he was selected by CAF as one of the best players among 200 African footballers for the past 50 years since 2006.

Apart from the crowd-wowing achievements by Chitalu, another one of Zambia’s success in football can be accredited to Christopher Katongo, a Zambian international footballer who also plays as a striker for Zambia Premier Soccer League Club Green Buffaloes F.C.

He won the Africa Cup of Nations and the BBC’s African Footballer of the Year award in 2012, with just over 40% of the public vote.

As if that is not enough, Patson Daka is another upcoming legend who has a lot of football accolades to his name. Daka, an Under-23 Zambian footballer plays as a forward for the Austrian team FC Red Bull Salzburg.

The young star was voted as the 2017 Central African Football (CAF) Young player of the year, which is recognized at the continental stage.

Zambia has had a successful performance in sports and the government has since engaged the Ministry of Youths and Sports to cooperate with the Ministry of Education to facilitate the growth of sports in the country.

The Zambia National Farmers Union (ZNFU) has called on government not to limit exports to Millers only but allow other farmers to export their...