Lusaka StarService with Excellence
HomeNewsCEHF collaborates with Ministry of Information on public health information and behavioural... 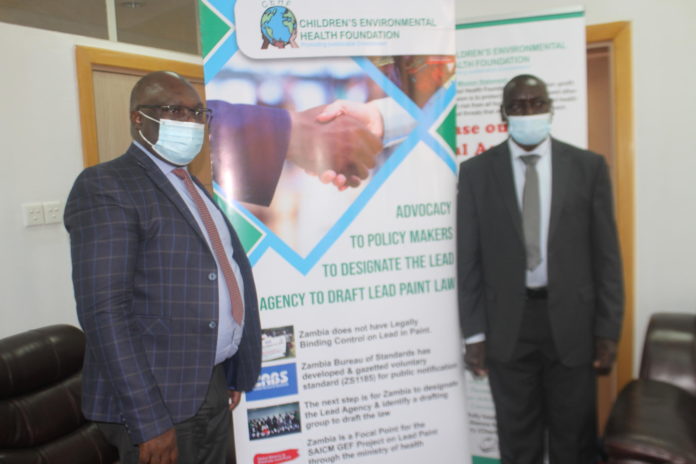 The Children’s Environmental Health Foundation (CEHF) has partnered with the Ministry of Information and Broadcasting Services in spearheading information and social behaviour change towards a Lead in paint free society.

Speaking when he made a courtesy call on the Permanent Secretary from the Ministry of Information and Broadcasting services Mr Amos Malupenga, CEHF Chairperson and National Lead Country Advisor Michael Musenga stated that the foundation had been longing to see the Ministry for the past four years.

He stated that the Permanent Secretary had been one of the major supporters for the organization’s programs especially in promoting global, local, and public health.

Mr Musenga mentioned that by then Permanent Secretary of the Ministry of Local Government and Housing, Mr Malupenga had penned a letter to four ministerial permanent secretaries and heads of the local council in Lusaka to convene and accommodate a high-level stakeholder meeting at the Lusaka City Council which had seen to the invitation of former Minister of Water, Sanitation, and the Environment Lloyd Kaziya in 2017.

“In 2017 CEHF conducted research on the levels of lead in paint from a group of selected paint industries. We looked at some industries in Lusaka and some on the Copperbelt and after the results, which contained high levels of lead in paint of up to 26,000 parts per million, we resolved that we needed to spearhead a Statutory instrument that was going to address this issue, “he explained.

The CEHF Boss stated that it was then later agreed during a high-level stakeholder meeting which had representatives from the Ministry of Water, Sanitation and the Environment, Ministry of Health, and other CSOs that the country needed to have a paint standard of 90 parts per million.

He also mentioned that CEHF had made some progress with regards to the selection of the lead agency which is the Zambia Environmental Management Agency (ZEMA).

He said that the agency was a focal point in identifying the necessary environmental and public health contents of a statutory instrument.

“There are 74 countries which have put in place laws to safeguard the health of the children, the public and that of expectant mothers. Zambia is among the 20 African countries that are a signatory to this cause and number five during the IPEN Global Meeting in Geneva Switzerland in 2017,” he said.

Mr Musenga stated that CEHF had been working closely with the United Nations Environmental Program (UNEP), World Health Organization (WHO), and Global Alliance on Mercury.

He mentioned that the country had made tremendous progress towards revising the lead in paint standards and that it was worth noting that in 2020 the Zambia Bureau of Standards established a voluntary paint standard (ZBS 1185) which regulates the production of paint to 90 parts per million.

“It is worth noting that CEHF has scored a number of accolades towards these campaigns. We were once awarded by the Vice President in  2019 for our role in environmental health in Zambia,” he said.

During the courtesy call, Mr Musenga had made a request to the Ministry of Information to grant the organization access to the Zambia National Information Service (ZANIS) who would help in advocating and sending information in some of the districts in the country around Lead in Paint and other public and environmental health matters.

Meanwhile, Ministry of Information and Broadcasting Services Permanent Secretary Amos Malupenga stated that since the organization was already being assisted by ZANIS in Livingstone, it was important to must agree on the presence of CEHF in some of the other districts.

He mentioned that ZANIS was interested in such stories and they had a pure interest in stories that impact human-centred standards of health.

Mr Malupenga stated that since ZEMA was currently in four districts, it would not be easy for CEHF to reach out to all 116 districts in the country.

He, however, mentioned that his office was ready to work with CEHF and will have a letter tabled and addressed to ZANIS to help in disseminating information on the effects of lead in paint and other campaigns.

“You need effective collaboration with ZANIS and other stakeholders and that can be arranged and may not be a problem at all,” he assured.

And Mr Musenga explained to the Permanent Secretary the three major campaigns CEHF had been working on since its establishment.

He explained about the Mercury in dentistry campaign which had been an effective campaign with the Zambia Environmental Management Agency and the Dental Association in Zambia with of course support from the Global Alliance on Mercury. He also mentioned that the organization was working on harmful pesticides, plastic pollution, and COVID-19 prevention materials.

The CEHF boss explained about phasing out mercury use in dentistry and Make Dental Amalgam use in Zambia a history Campaign.

Government says stipends such as meal allowances are physical and can only be obtained if students are available on campus. Speaking in a telephone interview,...