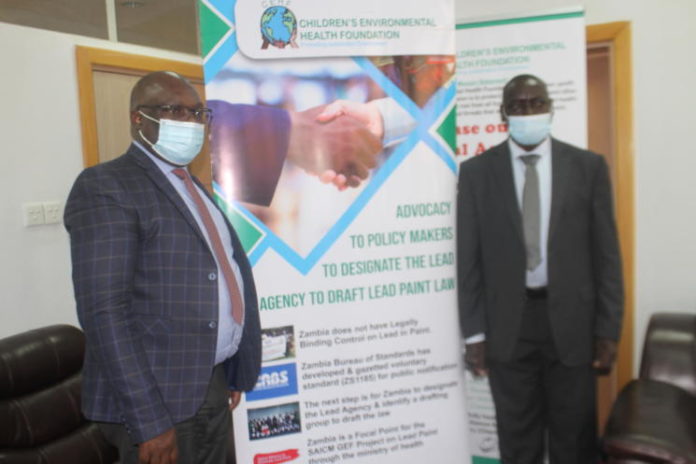 The Children’s Environmental Health Foundation has called on the government of the Republic of Zambia to take lead and fast-track the process of the statutory formulation of lead in paint.

Speaking in an interview with the Lusaka Star, CEHF Chairperson Michael Musenga stated that the formulation of a statutory instrument that will guide lead in paint production standards will help the country have a healthy and safe environment.

Mr Musenga stated that the current lead in paint standards proved to be harmful to children and expectant mothers especially when the paint products were used interiorly.

He stated that paint industries had a mandate of ensuring that most paint products had a standard use of lead products of about 90 Parts Per Million, which was normal standard and proved to be less harmful.

The CEHF Chairperson explained that of course, the Zambia Bureau of Standards had recently established Voluntary Standards which are ZBS 1185 through the Ministry of Commerce, Trade, and Industry that helps paint industries normalize the standards of producing paint using lead but were not sufficient to curb some of the issues around the final product which mostly contained lead in high volumes.

“It would make the foundation happy to see to it that we see these companies produce some of these products in a very safe and less hazardous way and the environment without running of the onus of promoting public, and environmental health,” he stated.

Mr Musenga stated that it was CEHF’s mandate and vision to see to it that most paint products were produced and processed in safe environments.

By David Ndovi and Chiteta Chinyemba Chief Government spokesperson Dora Siliya has dispelled as unfounded and falsehoods, assertions in the social media domain, that the...