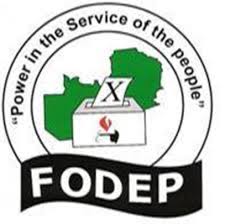 The Foundation for Democratic Process (FODEP) has welcomed the assurance by the Electoral Commission of Zambia (ECZ) to remain committed to delivering a free, fair and credible election.

In a statement made available to the media, FODEP Executive Director George Chimembe stated that the assurance by ECZ is not in any way a favour that is being done to the country and stakeholders, but rather obeying the constitution.

“FODEP is also aware that declaring an election free, fair and credible is a complex analysis of various components of the electoral cycle, including the electoral legal frame work, conduct of electoral body and stakeholders…especially during campaigns, the applicable laws especially the law on public gatherings and now the application of Covid-19 health measures, just to mention a few and all these culminate into what happens on poll day and soon after, verifying and announcing of election results,”  he said.

Mr. Chimembe said ECZ is respecting the rule of law as it is a requirement under section 73 of 35 of 2016 for the electoral body to announce results as soon as they become available.

The Executive Director added that the organization is aware of various challenges ECZ and various stake holders have faced in preparing for this year’s elections, especially during the pandemic and the toxic electoral space which was exacerbated by electoral violence.

Mr. Chimembe urged ECZ to learn lessons from past elections and ensure polling stations open on time as prescribed and that all election materials are delivered in good time to avoid unnecessary speculations and violence as happened in Kanyama.

“FODEP further expects ECZ to stock enough GEN 20 forms for equitable distribution of all polling agents appointed to represent their respective candidates and parties considering that we have over a dozen of parties participating in this year’s elections,” Mr. Chimembe said.

He said the organization expects ECZ to take extra caution during the verification of results transmitted from polling districts to avoid discrepancies between the figures from polling stations and those verified and announced at the national collation Centre.

Mr. Chimembe also said FODEP is happy that ECZ has granted certificates to police officers who have been deployed away from polling stations to enable them exercise their democratic right to choose leaders of their choice in accordance with s.48 of the Electoral Process Act (EPA).

The Executive Director further urged ZESCO to be proactive in order to avoid power outages experienced in the recent past in most parts of Zambia.

“FODEP is hopeful that ZESCO will play its vitally important role of keeping the electoral facilities lit throughout the poll day including during counting of ballot papers to avoid electoral malpractices which stakeholders have previous complained about,” he said.

Mr. Chimembe added that FODEP expects Government to be above board and resist the temptation of shutting down internet, as doing so will not only be an unnecessary recipe for speculation and agitation, but also denying citizens their right to receive information.

He urged Zambians to honor the legacy of the late First President Dr. Kenneth Kaunda by remaining peaceful and loving prior to, during and post the poll day.

Zambian music artist Mark Mulaza Kaira popularly known as Marky 2 has called on fellow artists to use music as a tool for educating...