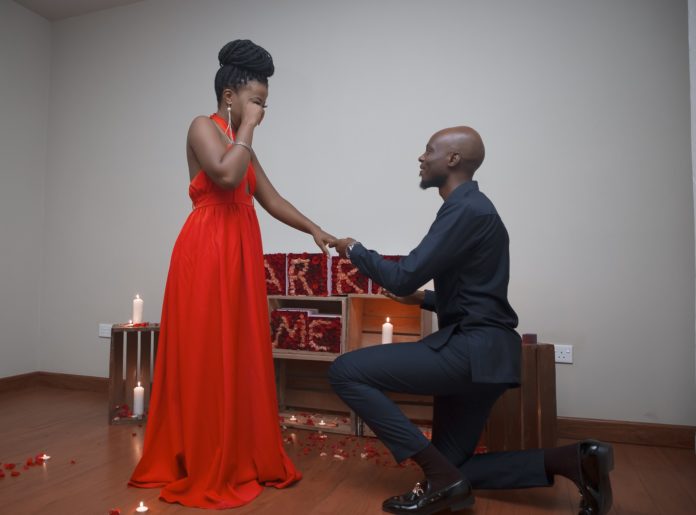 Are those wedding bells we hear around the corner? Well, Pompi is off the market after recently proposing to celebrity girlfriend Esther Chungu on his birthday which fell on Friday.

Details of the engagement were only brought to light this weekend when Pompi posted on his social media saying yesterday was not only his birthday, but it also marked the death of ‘self’ birthing a new being of ‘us’, the gospel music hitmaker said in a tweet.

The Zambia social media space has been buzzing with the exciting news; we had to jump on the train.

Here’s what the Twitterverse had to say about the recent marriage proposal on the block. A lot of heartbreaks out there, eh?

The gospel artist, famed for the ‘Mulungu samagona’ hit, has been looked upon as a mentor as well as a great musician by many in Zambia and across the region. So it’s only right that he gets his happy ever after.

I love you my queen and I am looking forward to spending the rest of my life with you.

The recently engaged couple only brought their relationship to social media about two months ago. Talk about keeping their love lives away from prying eyes, exclusively exclusive!

In an interview with Zambia Music Blog talks (ZMB talks) back in September, Esther publicly announced she was dating Pompi and that it had been going on for months.

Dating someone in the same industry has been quite interesting and an amazing experience,

She reviewed that they worked together on her recent album, ‘April’, and that she has so far worked on two songs with him.

Esther’s co-host on Zambezi Magic’s Tuvwange Lifestyle, Michelo Malambo, posted on her social media congratulating the two on their union.

It appears the soon-to-be-married couple already has their marriage line-up sorted out.

Everyone knows that getting a boyfriend’s sister’s approval is of paramount importance and she is definitely winning.

Nasana, Pompi’s elder sister, said that she is literally bursting with excitement as she has always wanted a younger sister to spoil and her brother finally made it possible.

Congratulations and all the best to the new couple on their journey.

The University of Zambia (UNZA) HIV/AIDS Response Team recently launched a campaign focused on enhancing the attainment of education of the girl child through donation...