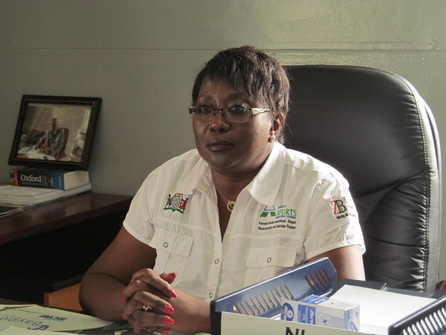 Ms. Emerine Kabanshi, 54, a politician residing at Plot 800, Kanakantapa area in Chongwe District, has been arrested for abuse of authority of office, contrary to the laws of Zambia.

In a statement issued by the DEC Public Relations Officer Theresa Katongo, particulars of the offence are that Ms. Kabanshi, while serving as Minister of Community Development and Social Services, jointly and whilst acting together with other persons unknown, on dates unknown but between January 1, 2017 and August 21, 2017, in Lusaka did abuse her authority of office by unduly influencing the engagement of Zambia Postal Services Corporation (ZAMPOST) as payment service provider under the Social Cash Transfer Programme, an act prejudicial to the interests of the Government of the Republic of Zambia and beneficiaries under the Social Cash Transfer Programme.

Furthermore, Ms. Kabanshi, on dates unknown but between August 21, 2017 and April 26, 2018, abused her authority of office by directing the extension of the Zambia Postal Services Corporation scope of works under the Social Cash Transfer Programme to include areas which were not covered in the initial contract.

“Further, having probable and justifiable cause to believe that the said contract was duly terminated by the Ministry, Honourable Emerine Kabanshi did abuse her authority of office by directing the rescission of the termination of the contract between Zambia Postal Services Corporation (ZAMPOST) and the Ministry of Community Development and Social Services, an act prejudicial to the interests of the Government of the Republic of Zambia and Beneficiaries under the said programme,” reads the statement.

The suspect is on Police bond and will appear in court soon.

The former minister first came into the spotlight of government’s corruption wings after an audit in August 2018 revealed that ZAMPOST diverted funds meant for the donor-funded social-cash transfer program. The Audit revealed that the funds were diverted without authority or consent from cooperating partners, and also that the social-cash transfer program was invaded by bogus beneficiaries in collusion with some junior civil servants.

An insight on toxic lead and a supreme lead free environment

There is more reception of metals other than being an earthly gesture of being discovered, unearthed, altered and refined them. From the benevolent endowment...