Lusaka StarService with Excellence
HomeNewsHH PLEDGES A BETTER ZAMBIA FOR ALL 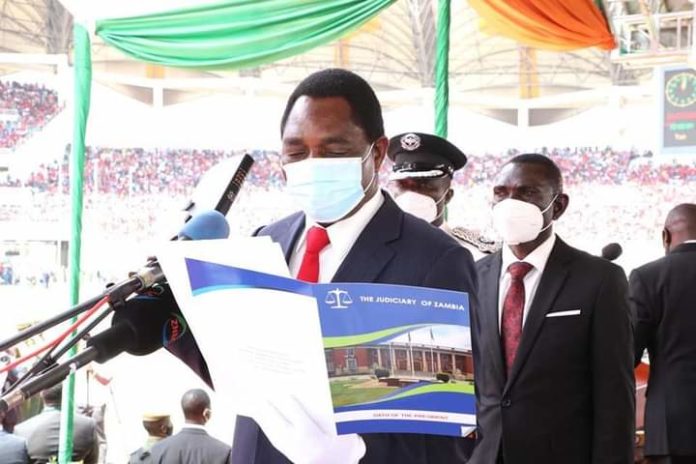 President Hakainde Hichilema has pledged to undertake an ambitious economic and social transformation agenda that will move the country forward by reducing poverty and creating equitable opportunities for all Zambians.

He was speaking at his inauguration ceremony as seventh Republican President held on Tuesday August 24 at Heroes stadium in Lusaka.

President Hichilema said that his government will focus on restoring macro economic stability and promoting growth of the Zambian economy in the next 5 years.

He added that attention will be given to lowering fiscal deficit, reducing public debt and restoration of social and market confidence.

Our National Budget has been overwhelmed by debt servicing, emoluments, and consumption when there should be greater room for investment and growth,

The President said the high levels of unemployment and poverty especially among young people are of great concern and will be on his agenda.

He added that he will aggressively promote the creation of jobs and opportunities that create wealth, especially for youth and women.

He emphasized that his government will have zero tolerance to the scourge of corruption which has eroded the country’s resources and robbed it of growth, adding that the fight against corruption will be professional and not vindictive.

The President assured that unfettered autonomy will be given to institutions mandated to investigate and prosecute those found wanting without fear or favor.

President Hichilema added that his administration will prioritize establishing a stable and predictable environment that will promote private, local, regional and international investment as well as the protection of Private property and generate value for all stakeholders in society.

God has blessed us with abundant natural, human and other resources that we will drive greater value from, throu­gh value addition and the promotion of greater supply chain participation by our citizens,

He said he will enhance linkages between education and industry to ensure graduates have relevant and employable skills.

At the same event, various foreign dignitaries and Heads of State congratulated President Hichilema on winning the August 12 General Elections and wished him well.

Malawian President Dr. Lazarus Chakwera said the peaceful transfer of power from one president to another is an expression of the spirit of civility and generosity of the African people.

He praised the Zambian people for having distinguished themselves as a bastion of democracy and a beacon of constitutionalism.

He stated that the Zambian story is proof positive that Africa is not an infant to be babysat not is it a charity case to be pitied but that Africa is the spirit of unity and tenacity finding expression in the will of the Zambian people.

Wherever there is an African today, there is celebration and joy there, and all of us have you, the Zambian people, to thank,

The Zambia Female Netball team (Chipolopolo Queens) failed to record any victory after losing all the four games to Uganda, Australia, Fiji and Trinidad....