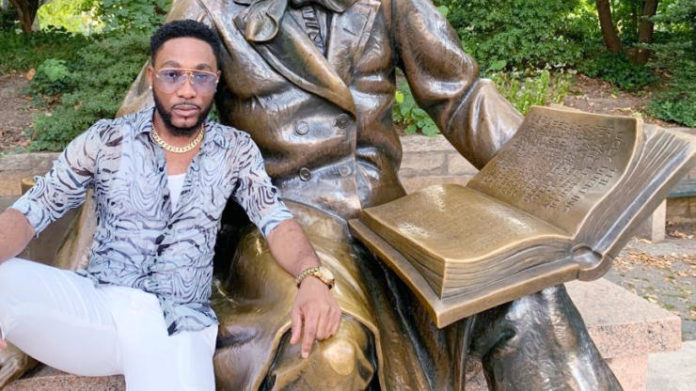 Best known by his alias CQ Muzukulu, Chisanga Queville Chansa is a singer who has made quite a number of strides in the music industry. You cannot talk about Zambian music without accrediting some of its growth and development to him.

He is one of the few artists whose music career has evolved over the years. From singing and releasing sing along songs, to acting in a movie titled PIYO as one of the main actors alongside the famous Nigerian actor Jim Iyke, considered to be one of the most expensive actors in Nigeria, CQ has shown his fans and followers that he is just getting started.

The movie got recognition on the international market and CQ has reaped the benefits that come with being multi-talented, determined and driven.
It’s his drive to see the entertainment industry grow that has sent him to the United States of America for a project that he is yet to announce.

So far, he has visited a number of famous places in the US. He has been to the Tyler Perry Film Studios in Atlanta were he had a meeting with the team there and he is keeping his fingers crossed for something that will elevate the entertainment industry in Zambia.

When I go out I always want to represent and do something for the motherland. I’ve always looked at myself as that artist that wants to elevate the standards of Zambian music and put Zambia on the map.

He is one of the few artists who has been striving to see the industry grow for the longest time, he has made his records with a number of triumphs.

I don’t want to dwell on my past glory, but past glory has something to do with the present because it shows exactly where someone is coming from as well as what he wants to do for the country.

When it comes to collaborations and making strides in the music industry, CQ does nothing short of recognition and an applause, he is arguably the only artist in the country to have worked with renowned video producer Clarence Peters. Peters is behind most of Davido’s music videos, P-Square, Tiwa Savage, kiss Daniels, Wizkid, Burna Boy and a lot more. It is no secret that music collaborations bring a different type of sound for all parties involved, especially when done with the right people. Like someone once said

He is equally one of the first few artists to have premiered a music video on Trace Urban before the introduction of Trace Africa. The ever young artist has undoubtedly contributed greatly to the music industry and will stop at nothing to elevate the flag to unmatched heights.

He has experienced his fair share of fame in the country from winning awards to being on magazine covers and billboards, and yet the fire and passion that he has for the industry is still as strong as ever. He is still very much in love with the industry and will stop at nothing to see it excel and lifted to even greater heights.

His US tour begins in New York City, where he is working on his project from. He will then proceed to California then Las Vegas. He will be in the US up until 5th November 2019.

From his social media posts on various platforms it is clear that his fans are curious and anxiously waiting for the big revelation of what he is actually working on in the States.

Music nurtures culture and it builds a community. With artists like CQ, whose fire and thirst for music and its growth cannot be quenched, you are assured of something bigger and better every time the curtains open.

Media mogul and former journalist Nicolas Pompigne-Mognard has urged African media outlets to improve on the quality of their content because of the change...