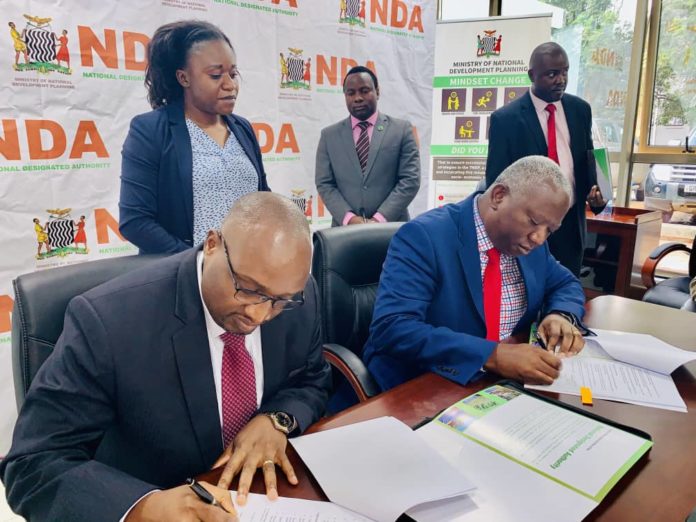 The Ministry of National Development (NDP) has signed an implementation agreement for the technical assistance component of building a renewable energy financing framework project in Zambia.

NDP Minister Alexander Chiteme said that the partnership between the Ministry, the National Pensions Scheme Authority (NAPSA) and the Zambia National Commercial Bank (ZANACO) is a huge milestone in supporting the financial sector through renewable energy capacity in the country.

Mr Chiteme explained that deliberate steps should be taken in fighting climate change as it is the biggest threat the world is facing towards the attainment of the 2030 agenda for sustainable development.

The Minister further appealed to everyone to work together and create a formidable team that will propel development through the new energy platform.

Meanwhile, in a speech read on behalf of the Africa Development Bank (AFDB) Manager Mary Monyai said that the Zambia renewable energy financing framework has been given a grant of 4 Million dollars from the green climate fund.

Monyai explained that the grant will be for 3 years in order to build the capacity of NAPSA, ZANACO and the Zambian financial industry in renewable energy and infrastructure financing.

Monyai further said the aim of the project is to support government in its efforts to catalyze private investments for small scale renewable energy projects.

She added that the newly diversified electricity generation will essentially reduce the country’s reliance on energy imports which has been an issue during the country’s power crisis.