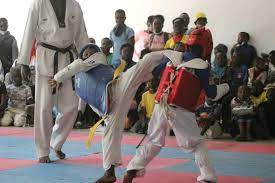 Zambia Taekwondo Federation (ZTF) has declared its readiness  to host this year’s National  All Styles Taekwondo Championship slated for Ndola.

Speaking in an interview with the Lusaka Star, ZTF  Vice-President, Whiteson Nsofwa said the federation is happy to host this year’s tournament especially that the last All Styles Championship was held in 2019.

We have not been active since 2019 because of the COVID-19 pandemic so we are excited to host this tournament,

Nsofwa said the tournament is a way of bringing together all taekwondo martial artistes and also regroup them  for next year’s activities.

This tournamnet will help us know which people are still active and also help us regroup various prticipants for both national and international activities planned for next year’s Taekwondo calendar,

The vice president added that the federation is ready to host participants from all over the country.

We have people coming from as far as North-Western province as well as other parts of the country,

Meanwhile,  a Taekwondoin, Josephat Mulungu said he is  happy to be among the people taking part in the national tournament.

I am excited about this tournament and I am looking forward to being the best among the participants,

Mulunga further said this tournament has come at a time when most youths need motivation to get involved in productive activities.

Because we have not had any tournament since 2019,  I see this tournament as the reason we will have more people joing the Taekwondo sport world,

The 2021 Taekwondo all styles championship tournament will be held on December 18, 2021 at Simba International school in Ndola.

Government says the late veteran journalist and media trainer Edem Djokotoe will be remembered as an expatriate that immensely contributed to media professionalism in...