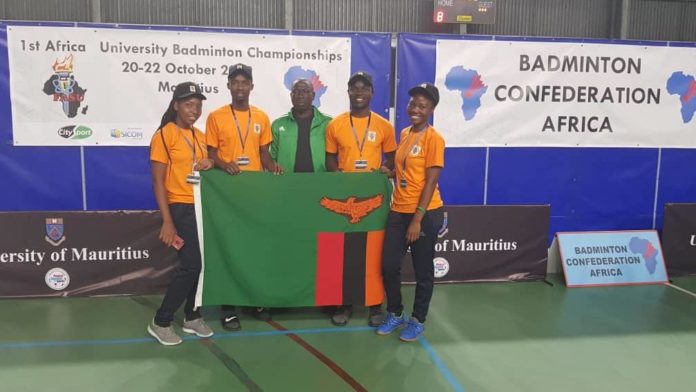 The University of Zambia (UNZA) badminton team has returned home with a bronze medal after competing in the just ended first African Badminton Championship hosted by the University of Mauritius.

In a joint effort during the double event category for women, Evelyn Tembo and Sundiwa Siachinga managed to beat the French Department Reunion Island, placing them third with a bronze medal award.

The international games ran from the 20 to the 22 October 2019, and accommodated students from Zambia, Mauritius, Reunion, Benin and South Africa.

Speaking in an interview with Lusaka Star, Evelyn Tembo expressed concern over the lack of interest by the UNZA management in the sport.

“I would like the administration to take interest in these small disciplines and put more effort and concentration into them as they do soccer,” Tembo said.

She said one of the reasons that deterred UNZA from excelling in all categories is the underfunding of the game and the interruptions they incurred during preparations.

“In my opinion, the equipment we have here is not favourable and also the facilities in Mauritius are standard, especially the courts, compared to ours here which posed a problem for us to adjust,” Tembo said.

She also appealed to her fellow team members to keep high spirits as this was the first of many international tournaments to come.

“I would recommend players to have a spirit of self-sacrifice where the school fails to manage, they should put in more effort to achieve their goals,” Tembo said.

The team hopes that the sport will grow in Zambia and look forward to winning more tournaments going forward.

It is said that everyone marches to the beat of a drum. One might dance to the angry sound of a heavy beat, the...