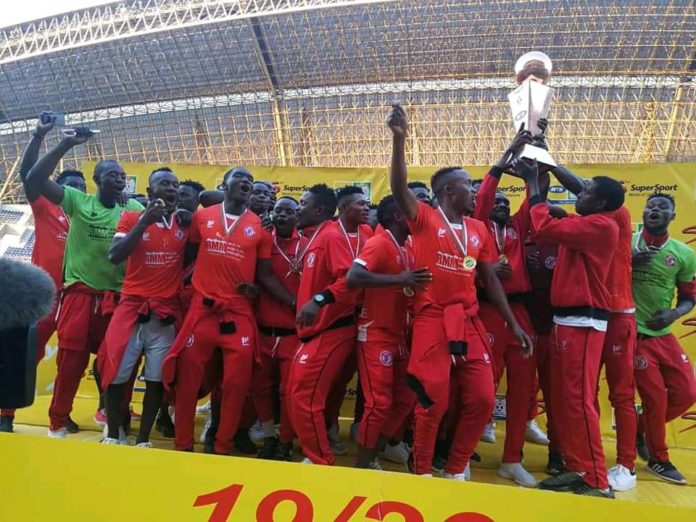 Nkana Football Club (FC) have been crowned Champions of the 2019/2020 Zambia Super League on goal-difference after Forest Rangers FC failed to register a win in a replay match against Zanaco FC at Levy Mwanawasa Stadium on Sunday afternoon.

Nkana waited for three days to know their championship status after Forest  won a last minute appeal for a walkover home loss to Zanaco, which was replayed on August 9.

Recently, the Kitwe giants were awarded three points in their final match which lifted them to 50 points on the log after relegated side Nakambala Leopards failed to turn up for the match.

Forest needed a win to be crowned as champions but they eventually settled for runners-up following a goal less result with sixth positioned Zanaco in Ndola.

This was Nkana’s 13 th league title and they will be joined by Forest  in representing Zambia in the Confederation of African Football (CAF) Champions League.

While third and fourth place, Green Eagles and Napsa Stars who both finished tied on 48 points will play CAF Confederation Cup.

Meanwhile, a Nkana fan, Chilombo Chin’ganda  congratulated the team in an interview with the Lusaka Star for securing the title in the just ended competitive league season.

Congratulations to Nkana for winning the cup, it sure was not an easy season considering all the efforts from all the teams that were involved,

The 2019/2020 league season came to an early end after the Football Association of Zambia (FAZ) executive committee announced its closure due to concerns raised by the Ministry of Health over the sharp rise in the Coronavirus cases.

The upcoming MTN/FAZ Super League season is scheduled to start on October 17, 2020 as planned by FAZ.

Zambia's renowned  hip pop  artist Alpha Romeo is set to release an album towards the end of the year 2019. Alpha Romeo whose real name is...