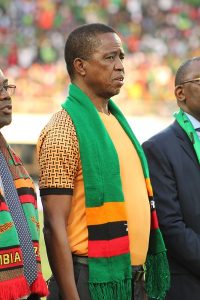 President Edgar Lungu has given US$ 32,000 to Nkana Midlands Bureau (NMB) following an appeal for assistance to clear outstanding dues owed by Nkana Football Club in Lusaka yesterday.

According to a press statement availed to the Lusaka Star, the funds will be invested in sustainability programmes as well as paying off former Nkana Football player Walter Bwalya.

The funds were received by NMB Patron Chileshe Kandeta and other executive members who were very thankful for the president’s generosity.

As Nkana supporters, we are very grateful to the Republican president for coming to the rescue of Zambia’s biggest and most popular sports team, Nkana Football Club,

Mr Kandeta said that President Lungu has been an ardent supporter of sports in Zambia and his parental intervention to allow the Football Association of Zambia (FAZ) league to resume on 1st July, 2020 attests to that.

“Today is yet another day of great appreciation to the president by Nkana’s millions of followers and the sports fraternity at large,” he said.

Meanwhile, President Lungu has advised the sports community to install systems that will guarantee transparent, accountable and efficient utilisation of resources so that there is sustainability in sports management and development in the country.

NMB is a non-profit society of all supporters of Nkana Football Club whose core business is to mobilize supporters in selected regions of Zambia.

Children who are forced out of school and into labour to help their families are denied the opportunity to acquire the knowledge and skills...