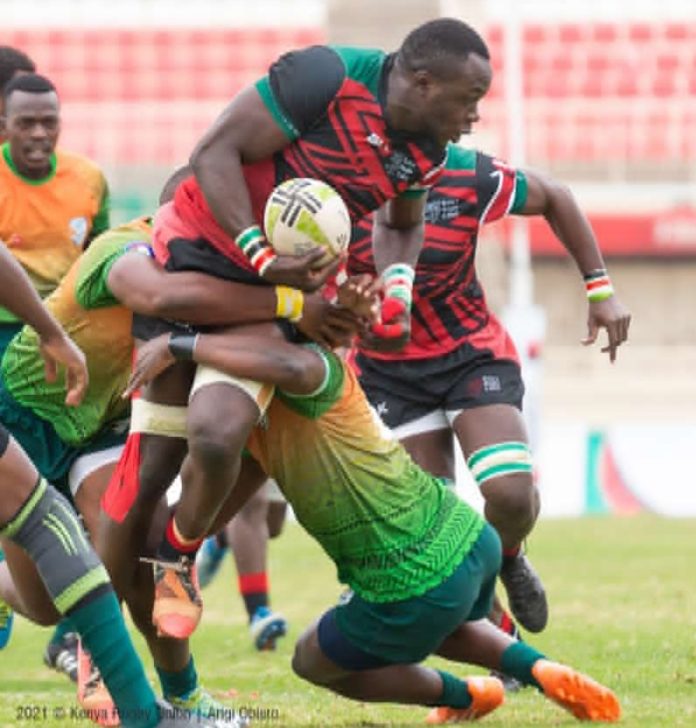 The Zambia Rugby national team has been denied an opportunity to qualify for the 2022 Rugby Africa Cup and 2023 Rugby World Cup after a 45-8 defeat to Kenya at the Nyayo National Stadium in Nairobi, Kenya.

The Copper Eagles of Zambia and the Simbas of Kenya went into the encounter with the hope of winning to salvage a place in next year’s Rugby Africa Cup tournament.

This was after both Zambia and Kenya lost in their opening Pool B preliminary matches to Senegal by 20-5  and 20-19  respectively.

The Kenya Simbas bounced back to winning ways on July 11, 2021 with a 45-8 win over the Copper Eagles to qualify for the Africa Rugby Cup.

The Copper Eagles managed to get one try through Israel Kalumba while a man of the match performance from Kenya’s Jone Kubu who scored 18 points from two tries, one conversion, one penalty, and one drop goal to inspired Kenya to victory.

The result in the Zambia-Kenya game saw Kenya and Senegal qualify for the 2022 Rugby Africa Cup which will also act as the Rugby World Cup 2023 to be held in France.

The qualification has raised the global ranking of the West African country eight places in the from 54th to 46th position.

Meanwhile, Zambia Rugby Union (ZRU) has attributed the poor performance to the lack of exposure of the team to high levels of competition.

ZRU Spokesperson Tom Chaloba said  the union is cognizant that the team has not competed internationally nearly two years leading to players being jittery during matches.

“As a union we acknowledge the fact that we needed to produce good results, therefore there are considerations of sending coaches for capacity building courses to enable them to manage high level games,” he said.

Chaloba added this has been prompted by the level of coaching credentials coaches from rugby powerhouse countries like Kenya have.

“Our colleagues in other countries have Level Three qualified coaches, while Zambia has Level One coaches and once resources are ready the coaches will be engaged in the courses,” he added.

The ZRU Spokesperson noted that the essence of the preliminary stage was to pick teams across the continent that would feature at the 2023 Rugby World Cup in France.

“Unfortunately, the team was booted out in preliminaries and as a union we are going back to the drawing board to review the fundamentals that led to the performance and find ways of competing favourably in the coming tournaments,” he said.

Chaloba further said the union will soon send a Seven Aside team to Cape Town, South Africa for the qualifiers to the Rugby Sevens World Cup.

“Not all hope is lost for the team as they have an opportunity to save the pride of the sport through qualifying for the 7s World Cup,” he said.

Depression and suicide. These are the two words that are unavoidable in the mouths of people in the modern world. Nowadays in Zambia, everyone is...