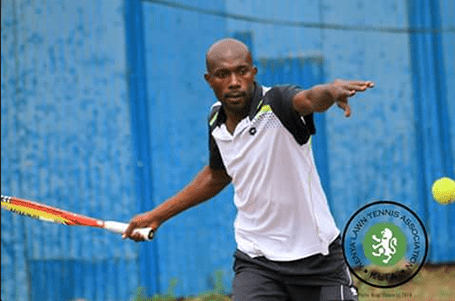 This is after he beat Owen Mwale with two straight sets in the finals  held at the Lusaka Tennis club yesterday.
Kazembe claimed a 6-0, 6-2 against the current reigning U-18 Champion who was playing for the first time in the finals against Mwale.
Kazembe received K4,500 for winning the championship while Mwale walked away with K3000 for finishing as runner-up.
“I would love to urge all upcoming tennis players to maintain good levels of discipline if they are to go far in their careers…I would also like to congratulate Owen for playing in the finals, he should keep his head high,” Kazembe said.
To progress to the finals Kazembe struggled to beat Lighton Ndefwai with set scores 6-3, 6-3 in the Semi-finals after he thumped Hector Sado 2-6, 6-2, and 6-4 in the quarter finals.
And in the girls category, Maggie Mutale was crowned champion after she beat Priscilla Mayuka with set scores 6-1,6-2 in the finals.
Mutale pocketed K2,500 for winning the category while runner up Mayuka walked away with K1,500.
And Swedish Ambassador Henrik Cederin, said Zambia has so much talent and would reap many medals at international level if given proper support.
Cederin said investing in sports is one way of keeping citizens healthy and productive hence, contributing to the development of the country.
“Government should see potential in supporting sports because it creates awareness among citizens…the more money being invested in sports the more the number of medals and accolades athletes will win,” she said.
Meanwhile, Zambia Tennis Association (ZTA) President Wane Msiska has thanked Mika group of companies for sponsoring the tournament.
“We are very happy with the skills showcased during the tournament by the players and it calls for team work among the tennis lovers if the sport is to continue growing,” Msiska said.

Kings of Comedy returns to the scene bringing legendary stand-up comedians back to the stage;following its absence for over a decade. The event will showcase...

HUAWEI; CHANGING THE FACE OF EDUCATION THROUGH ICT IN ZAMBIA