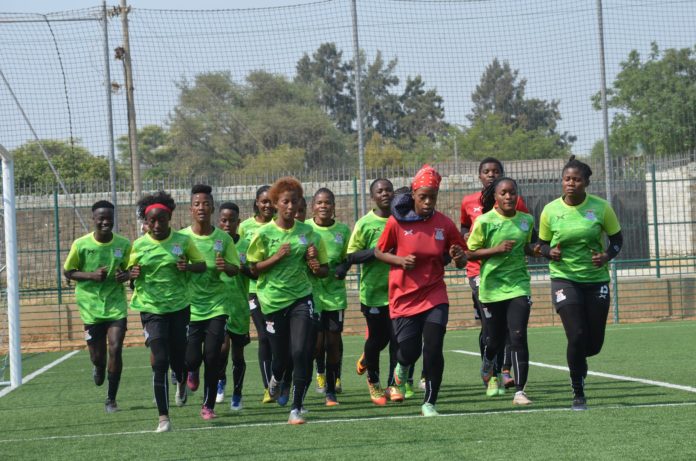 The Copper Queens have resumed training for the back-to-back Tokyo 2020 Olympic fourth round qualifiers against Kenya.

Speaking in an interview with the Lusaka Star, coach Bruce Mwape said that he expects the European based trio of Rachael Kundanaji, Misozi Zulu and Barbara Banda to join camp by November 5 after featuring for their respective clubs.

Kundanaji and Zulu who are on the books UEFA Champions League campaigners BIIK Kazhyghurt and Barbara who plies her trade at Spanish outfit EDF Logrono will all be available for the November 8 away tie in Nairobi and the return leg billed for November 12 in Lusaka.

Winner between Zambia and Kenya will join the winner between Cameroon and Ivory Coast in the final qualifying round.

The runner up will play Chile in a two-legged play off as their ticket to the Olympics.

Mwape said Zambia was focused on reaching the final round and fight for a place at the Tokyo 2020 Olympics.

We are fighting for the goal of Olympic qualification,

Nineteen players have reported for camp on the opening day as Zambia steps up preparations for the two-legged tie against Kenya.

Zambia reached this stage with a 5-0 drubbing of Zimbabwe at home before the Mighty Warriors failed to show up at their home ground for the return leg.

In the third round Zambia dispatched Botswana via a 3-0 aggregate score.

The Copper Queens have had a decent run in 2019 with a second place finish at the COSAFA championship.

First Quantum Minerals (FQM)’s Kansanshi will not lay off any of its workers as decided earlier due to the newly introduced tax by the...

THE AFRICAN FREEDOM DAY – 54 YEARS ON