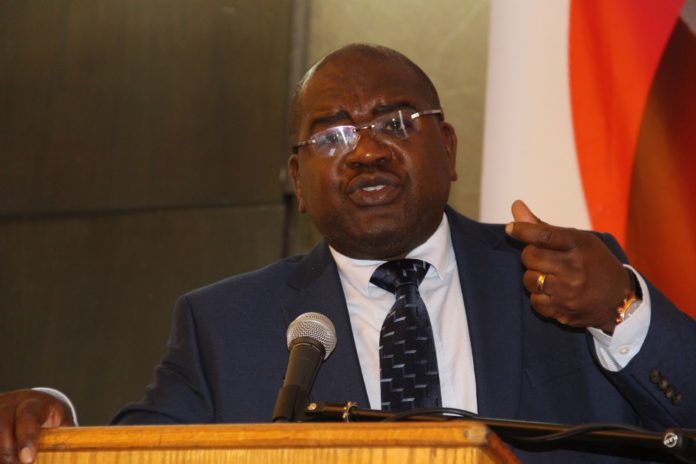 The Ministry of Health has announced that the government is putting in place measures to up-scale its response to the coronavirus, known as Covid-19.

Speaking when addressing the press and other high ranking officials, minister of health Chitalu Chilufya disclosed that Zambia has not recorded any case of the virus, and that the measures being put in place are meant to enhance the country’s preparedness, surveillance and response to the threat posed by the virus.

Dr Chilufya added that the disease intelligence arm of the government Zambia National Public Health Institute (ZNPHI) has scaled up surveillance of the disease.

Zambia National Public Health Institute (ZNPHI), has been conducting surveillance and to date 28 alerts involving individuals who travelled from areas with confirmed COVID- 19 cases have been investigated.

Beyond these, more than 29,000 passengers have been screened at our international airports in the past one month. Of these, 2,300 travellers arriving from high-risk areas have been identified and are being tracked for 14 days.

The government through the ministry of health and cooperating partners has put in place some interventions to help contain the virus, Dr Chilufya said.

He further disclosed that a National Public Health Emergency Operations Center (PHEOC) has been established at the ZNPHI and is using a multi-sectoral Incident Management System approach to coordinate surveillance, preparedness and response at technical level.

“Active surveillance is ongoing at points of entry and in healthcare facilities. All international passengers are being screened and those from high risk countries followed up for 14 days,” he said.

The Minister of Health added that isolation centres have been set up at district level across the country to safely manage cases and limit the spread of the disease.

Dr Chilufya said that infection prevention and control measures are being strengthened, through the procurement of disinfectants and personal protective equipment which include gloves, face masks, aprons and hand hygiene supplies.

He further added that testing centres have been set up.

He said that a call centre has been set up, which can be reached on 909 toll-free, and that there will be community engagement through the media, such as radio, television and social media platforms.

Dr Chilufya added that there is specialised training for critical staff such as key healthcare workers and surge staff including immigration, customs, defence, security and point of entry personnel is being rolled out countrywide.

He further said that the government has set up an emergency fund to provide resources for surveillance, response and preparedness for the virus.

Dr Chilufya said that there are key measures that have been bought into immediate effect which include the mandatory reporting of individuals suspected to have COVID-19 to health officials, mandatory collection of all samples for diagnosis and management of the virus, a mandatory provision of hand hygiene facilities in all public places, among others.

He also urged the public to avoid handshakes, and social distancing of at least one meter when interacting with those who display symptoms.

The health minister urged members of the public to exercise high levels of hygiene and comply with all the measures being put in place to contain the pandemic.

The World Health Organization (WHO) is warning that the window of opportunity to prepare is closing and that critical gaps remain.

Every country can still change the course of this pandemic by scaling up their emergency preparedness or response.

The inter-governmental organisation says it has now shifted from “readiness” to “response” mode on the continent.

Africa had so far largely been spared the rapid spread of COVID-19, which has infected at least 132,000 and killed nearly 5,000 worldwide.

Kenya, Ethiopia, Sudan and Guinea announced their first confirmed cases of coronavirus on Friday as the disease has now spread to at least 18 countries in Africa.

Other African countries that reported cases of the disease are Morocco, Tunisia, Egypt, Algeria, Senegal, Togo, Cameroon, Burkina Faso, the Democratic Republic of the Congo (DRC), South Africa, Nigeria, Ivory Coast, Gabon and Ghana. Most of the countries’ totals are still in single figures.

Most of Africa’s reported cases were foreigners or people who had travelled abroad.

The WHO said while local transmission – that is people with no travel history – remains low, containment is the most appropriate strategy. That means detecting cases quickly, isolating them to minimise transmission, treating them and tracing their contacts.

Yet the relatively low numbers in Africa have baffled experts.

Some suggest the tropical climate is less favourable to the new virus.

John Nkengasong, head of the Africa Centres for Disease Prevention and Control, says no data is available to support that theory.

But we know that Covid-19 is part of the coronavirus family to which the common cold belongs.

He said, in a report with the BBC

These better-known coronaviruses are less prevalent where temperatures are higher.

But Dr Nkengasong hastens to point out that there are significant outbreaks of Covid-19 in countries in the tropics, like Thailand.

If the virus follows the pattern of other viruses, with seasonal peaks in winter, this will be a source of concern for southern Africa, which is heading into its colder months and “flu season”.

One thing that put Africa a step ahead of the rest of the world was its early screening at airports and other ports of entry.

This is because infrastructure was already in place and health workers at hand because of the outbreak of Ebola in the Democratic Republic of Congo, which now appears to be coming to an end.