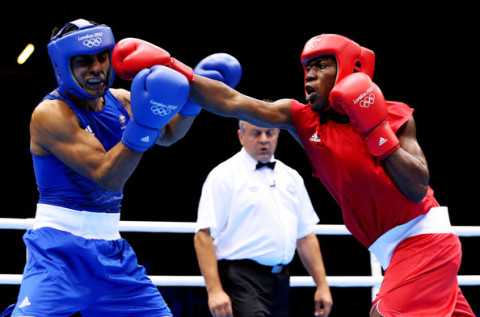 Nkumbu Silungwe has failed to make it to the medal bracket of the ongoing All Africa games, after being eliminated in the quarter finals.

Silungwe lost to Djedoubom Idriss of the Democratic Republic of Congo in the 69kg welterweight challenge, to bow out in the last eight yesterday.

The loss is a big blow for Silungwe, who on Saturday lost his six-month old son, Temwani, back home in Zambia.

The Verdict was a 4-1 unanimous points decision in favor of the Congolese.

And National Boxing coach, Wisdom Mudenda said though it was a difficult fight, Silungwe gave in his best.

Mudenda said the loss of his boxer’s son had a negative impact on his performance.

He has however encouraged Silungwe not to lose hope as he has a big task ahead in the qualifiers for the Olympics which start soon.

With Silungwe eliminated, Zambia’s hopes for a medal in boxing now rest on Evaristo Mulenga and Mbachi Kaonga who both take to the ring in the quarter finals today in Rabat.

Evaristo is scheduled to meet Ndevelo Tryagain of Namibia in the 57kg featherweight category, while Mbachi, fighting in the 81kg light heavyweight category, will battle it out against Samed Shakul of Ghana.

Meanwhile, in Casablanca, the mens’ handball team faces a daunting task of beating Angola, whom they meet in the quarter finals today.

Despite being the weeping boys of the group, Zambia miraculously qualified to the quarter finals, having finished bottom, thanks to Cameroon’s non appearance at the games, which gifted all the teams in the group with three points.

The Andrew Kalunga-coached side yesterday lost their third consecutive game, going down 41-33 to Guinea.