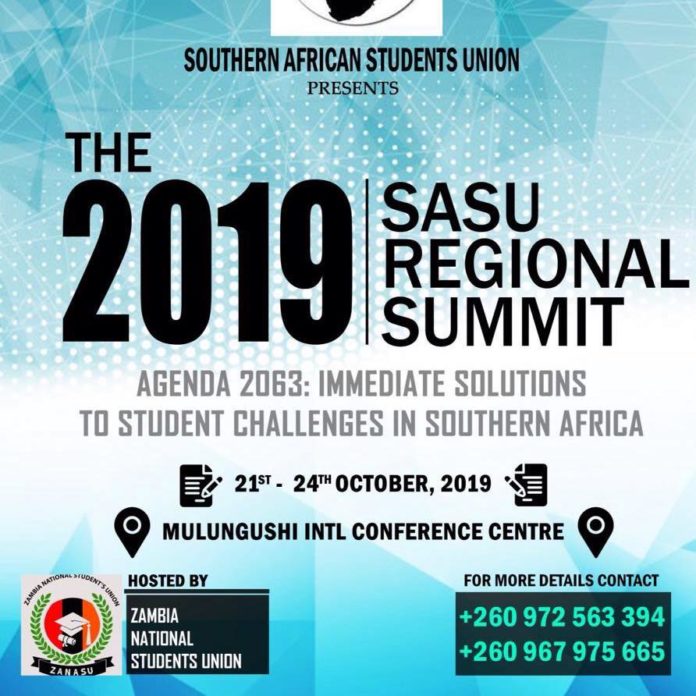 Speaking on behalf of the 2019 SASU summit delegates at Melsim Lodge in Lusaka, Zambia National Student’s Union (ZANASU) President Misheck Kakonde said that delegates have agreed to be united and offer solidarity to each SADC member state through communication platform and regular physical meetings.

He said that the members of the house present at the summit have agreed on the need to elect an Ad-hoc Committee, mandated to oversee the successful implementations of the resolutions of this year’s summit.

The committee will also charter an effective framework which provides leadership in the region.

Mr. Kakonde said that among the issues agreed on, the Summit decided that all member states should focus on ensuring Equal Access to Healthcare and Sanitation for all students across Southern Africa.

He also said that SASU members have also agreed to work with their respective government on issues of climate change through submission of ideas that could reduce the impact of climate change.

They have also resolved to advocate for a strict regional Gender Policy in all learning Institutions in the SADC region.

Mr. Kakonde stated that the Summit has agreed to engage all existing Students Unions in the SADC region for a shared ownership of the institution, and to resolve the long-standing question of legitimacy that dogged the current SASU Executive.

The committee will have its first meeting early next year in Angola, after which it intends to call representatives from all fifteen SADC members to a meet in Mozambique.

Furthermore, ZANASU expressed gratitude to international delegates for the attendance and support during the 2019 SASU summit.

ZANASU has also thanked government officials and opposition members of parliament who took time to address the local and international student’s unions.

The newly elected ad-hoc committee are; the current ZANASU President Misheck Kakonde as chairperson and Osvaldo Mauaie from Mozambique as Vice Chairperson. Japhet Nthala from Malawi as Secretary General and Fadzai Chareka from Zimbabwe as Vice Secretary General. Shackira Sinumbe from Malawi as Treasurer and Jose Lopes from Angola as the International Communications Director.