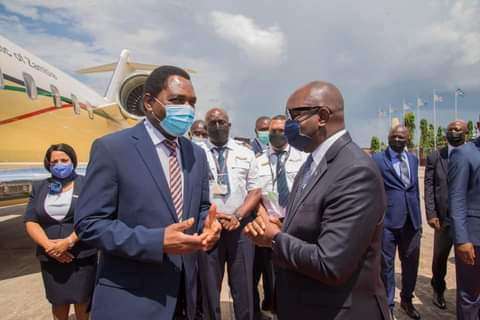 President Hakainde Hichilema says it is a tradition in the Southern African Development Community (SADC) region for a newly elected president to pay courtesy visits to neighbouring countries in the region.

Speaking shortly before he left for the Democratic Republic of Congo for bilateral talks and to also attend the DRC-Africa Business Forum, President Hichilema says he will visit all of Zambia’s eight neighbouring countries in order to reinforce good neighbourliness, security, trade and investment.

It is tradition in our region and continent that when a president comes into office, he or she needs to pay courtesy calls to neighbours ,and I have only done South Africa and Bostwana , so today am going to Congo DR,

Congo DR is important as President Tshisekedi is the Chairman of the African Union (AU).

The president also said that he will soon visit Malawian President, Lazarus Chakwera, who is also the chairman of SADC.

Since taking over office three months ago, President Hichilema has travelled to the United States of America (USA), the United Kingdom (UK), South Africa and Botswana.

Meanwhile, President Hichilema has revealed that he will engage DR Congo President, Felix Tshisekedi in order for the two to resolve the ongoing boarder dispute in Luapula Province.

It is not a secret that Zambia and DR Congo have issues concerning the boarder in Chiengi, in Chief Puta, Chief Kaputa, Chief Nsama and all the way up to Lake Tanganyika, so we could like to resolve these old issues,

The Football Association of Zambia (FAZ) has directed the Prison Leopards Football Club to dismiss Dudley Fichite, as he is serving a prison sentence. FAZ...