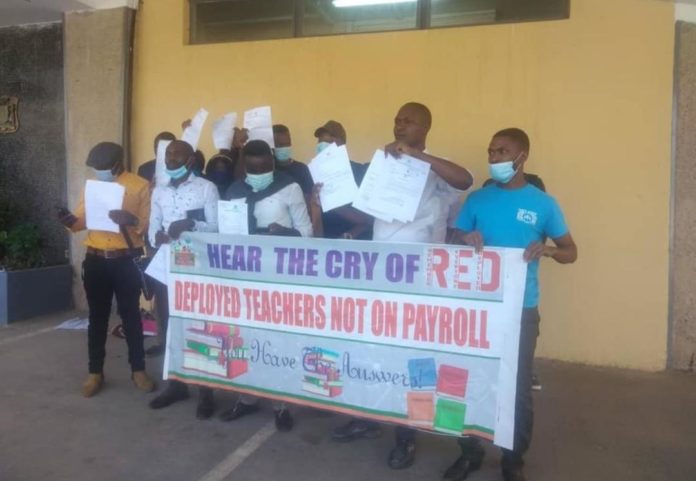 National Action for Quality Education in Zambia (NAQEZ) has called on the Teaching Service Commission to put deployed teachers on pay roll.

Yesterday, some teachers  who were deployed on replacement basis protested at the Ministry of Education demanding for government to place them on payroll having worked for more than one year.

In an interview with Lusaka Star, NAQEZ Executive Director Aaron Chansa said the teachers have worked for more than one year, and  it is only right that they are treated fairly by government.

Mr. Chansa said that the Minister of Education must take personal interest in the matter to ensure that it is resolved once and for all.

We need to quickly find means and ways of resolving this matter as it has been dragged for too long,

The Executive Director further noted that government is a big entity to recruit teachers and yet fail to put them on pay roll, hence the need for the minister to find out why some  individuals decided to recruit the teachers when government was not ready to employ them.

Those found wanting should be disciplined as this situation is not correct, and is portraying a bad picture on the government.

Meanwhile, Teaching Service Commission Secretary, Zachariah Luhanga said that on going investigations have revealed that 1,500 teachers deployed by government, but not on payroll have fake appointment letters.

Luhanga urged the protesting teachers to present their appointment letters to the commission or Ministry of Education for verification.

He said the teachers who protested at the Ministry of Education will be communicated to once the investigations are concluded.

The Zambia Tourism Agency (ZTA) has launched an online platform to license and grade businesses in the tourism sector. Speaking during the platform's official launch,...