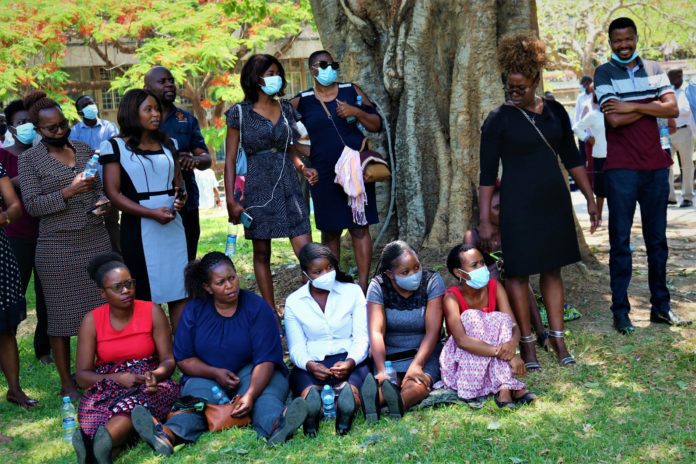 Three labour unions at the University of Zambia (UNZA) have appealed to government to change the management at the institution due to abnormal working conditions.

Speaking at a protest held at the University’s graduation square, Monday, UNZAPROSU President Michael Kaluba said management at UNZA has not being paying its workers their gratuities for the last 11 years.

Management is making  us work like causal workers in a factory. Therefore, we will continue protesting until the conditions of service are normalized,

He added that the three unions have engaged management on several occasions in order for them  to revise the workers’ conditions of work, but no action has been taken so far to address their grievances.

The UNZAPROSU president said that UNZA is in need of new management as the current office bearers have over the past five years run down the institution.

As long as we have this management at this university, UNZA will keep going down,

And UNZAPROSU Senior Trustee , Clive Ng’andu has implored the Minister of Finance to make adjustments to UNZA’s  allocation in the 2022 National  Budget in order for it to include gratuities.

It is very disturbing that there is no allocation for gratuities in the budget and the money that has been allocated to increase our grant at UNZA is insignificant and will not solve our problems,

According to the Estimates of Revenue and Expenditure (Yellow Book), the University of Zambia has been allocated K230 million in the 2022 National Budget.

Meanwhile, in a statement issued by UNZA Acting Head of Communication and Marketing, Damaseke Chibale, UNZA management has denied allegations that it has failed to dialogue with the unions.

Chibale said that top management cannot vacate its offices at the whim of certain individuals or groupings as that is a recipe for anarchy and a flagrant breach of the law.

UNZA owes around k700 million in respect of gratuities and pensions and that government is fully aware and is committed to look into it,

He further mentioned that payment of  terminal benefits of the workers is a matter that is actively in court and unions should not expect such a matter to be resolved overnight.