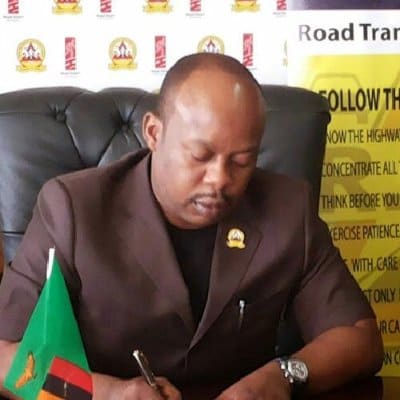 Mr. Soko said government is ready  through the  decentralized system to implement road safety under the MOU in all 10 provinces in order to ensure that all provinces start implementing the MOU by 2016.

He said the Ministry of Transport, Works, Supply and Communications and  RTSA are principal parties entering into partnership with seven other line ministries.

RTSA has partnered with the Ministry of Justice and the Lusaka City Council to renovate the fast track courts  in Eastern province , two on the Copperbelt and Southern province.

"RTSA has embarked on the set up of the transport intelligent systems with the support of World Bank- Southern Sub-Saharan transport programme (WB-SSATP). We will be conducting a pilot enforcement along the safer corridor from Kabwe to Chilanga,"

"The project  is aimed at promoting safety along the corridor. This will be achieved through frequent patrols by the traffic law enforcement  by the Zambia Police equipped with the necessary equipment and logistics to deal with all lawless drivers," he explained.


Mr. Soko  elaborated that RTSA has made recommendations to Road Development Agency (RDA) to consider  the plans for the link Zambia 8000 to incorporate road safety matters at design stage.

He said the recommendations include the provision of pedestrian side walks and cyclist paths, installation of roads studs, road signs and speed zoning in pedestrian sensitive locations.


Meanwhile, Global Road Safety Partnership Zambia (GRSP) Chief Executive Officer  Barry Watson said to address the challenges that were listed in the MOU, the organisation is in the process of producing tool kits for the members of parliament, work place, schools and the civil society before the end of this year.

Dr. Watson  said the battle against road accidents can be won by working together with stakeholders.

He was saddened that the southern region  is  still experiencing a high rate of road fatalities and injuries.

"Fifty percent of those killed are vulnerable road users, the pedestrians and cyclists including school children," he noted.

He reminded RTSA  that this is  the 5th year of the UN Decade and the road fatalities and injuries on our roads are a still a grave concern.