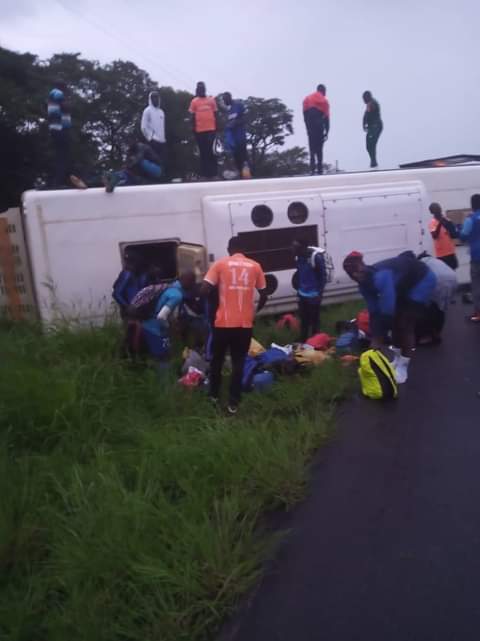 Two Quattro Kalumbila Football Club players have been admitted to Kabwe General Hospital with serious injuries after their team bus was involved in a road traffic accident along the Kapiri – Kabwe road.

In an interview with Lusaka Star, Quattro Kalumbila Coach Arnold Malisawa  said the bus overturned after the bus driver lost control due to heavy rains and potholes on the road.

The accident happened around 04 hours when almost everyone was sleeping apart from the driver and I,

Malisawa  disclosed that  the rest of the players are fine with just minor injuries which do not pose any serious threat.

Some players just have chest pains and minor headaches which do not pose any threats,

The coach for the North-Western Province – based club, said it is unfortunate that the accident happened when the team was on its way to Southern Province for a league match.

It is very unfortunate that this had to happen because the team was very prepared for the match against Livingstone Pirates,

He further said the match has since been postponed to a later date as the team is set to go back to Kalumbila district.

Quattro Kalumbila are on 13th position in the Eden University Championship with 20 points having played 18 games.

Famous Zambian Artist Elton Mulenga popularly know as Yo Maps has received a YouTube Silver Award. The artist received his award after he reached over...