Lusaka StarService with Excellence
HomeNewsFQM HANDS OVER 2,000 FACEMASKS TO HOSPITALS IN LUSAKA 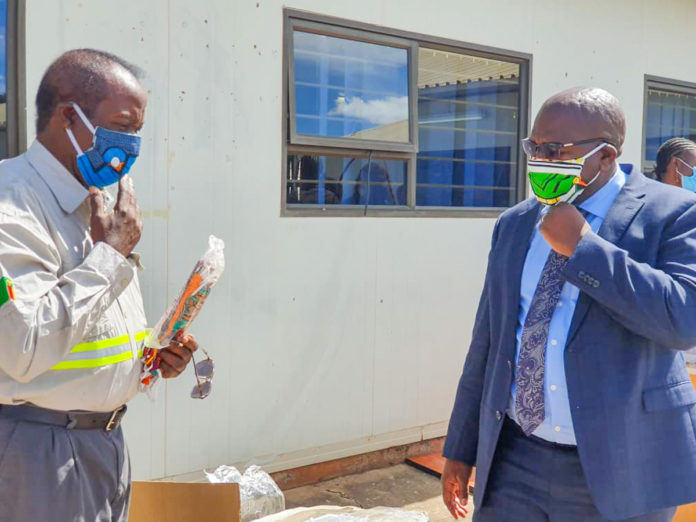 First Quantum Minerals (FQM) has handed over 2,000 facemasks donated by employees from the mining giant’s subsidiary, Kalumbila Minerals Limited, to the Ministry of Health for use at Lusaka’s main hospitals.

The hospitals in Lusaka set to benefit from the donation are Chilenje, Levy Mwanawasa, and the University Teaching Hospital.

FQM has taken extensive measures across the business to help protect its people and communities around its mining operations, and has increased information dissemination in line with government guidelines and directives,

General Chinkuli further said an additional donation of facemasks will be made later on by its Kansanshi Mining Limited subsidiary.

He added that the mining firm has provided financial support amounting to ZMK2.78 million to the Zambian government to help in the containment of the further spread of COVID-19.

Minister of Health Dr Chitalu Chilufya commended FQM for its continued support of the government in the COVID-19 response.

FQM remains a strategic ally of government in the fight against diseases, and we thank the mine for the work its doing in North-Western Province and the country at large,

Dr Chilufya called on other corporate entities to emulate FQM and urged them to benchmark the mining firm’s social and corporate conduct.

To empower local communities around its mines in North-Western Province, the mining company earlier in March engaged groups of local women to produce the facemasks, which are 100 percent cotton and use a double layer of fabric, in line with Ministry of Health guidelines.

More than 5,000 face masks have been made so far, with all FQM employees receiving the much-needed face covering for protection against the virus.

Zambia is a country rich in culture. With atleast 72 ethnic groups, understanding and knowing how to speak two or more of the local...

Chawama and George compounds sensitised on water and sanitation