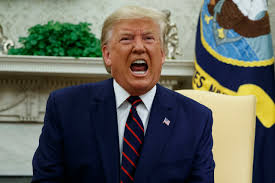 United States President Donald Trump has ordered his administration to stop all funding to the World Health Organization (WHO) accusing the organisation of “covering up and mismanaging” the spread of Coronavirus.

Speaking to the press at the white house on Tuesday, Mr Trump alleged that WHO lacked transparency over the Covid-19 outbreak and its subsequent decision to defend the actions of the Chinese government has cost the lives of many.

Had WHO done its job to get medical experts into China to objectively assess the situation on the ground and to call out China’s lack of transparency, the outbreak could have been contained at the source with very little deaths,

He stated that one of the most dangerous and costly decisions WHO made was to oppose travel restrictions from China.

Trump further accused countries in regions that follow WHO’s guidelines of escalating the spread of the virus by keeping their boarders open to China.

In February, Trump imposed a ban on travel from china into the United States which he has on many occasions held as a major decision in terms of slowing down the spread of Covid-19.

He said that with the outbreak of the virus, his administration was concerned as to whether the country’s generosity was being put to good use.

The US government is the major contributor to WHO with more than USD400- USD500 given every year under 15 percent of its total budget.

As the organisations biggest sponsor, the United States has a duty to insist on full accountability,

Trumps decision comes at a time when the whole world is grappling with the worst global pandemic.

Despite the allegation levelled on WHO, On January 24, Trump had tweeted, “China has been working very hard to contain the Coronavirus. The US greatly appreciates their transparency. It will work out well. In particular, I want to thank President Xi!”

Meanwhile, critics took to social media and condemned the abrupt decision made by the US law maker.

In an interview with BBC News, Legal Analyst and Law Professor, Kim Wehle said Trumps decision was inconsistent with the basic framework of American democracy.

The law maker said the happenings of United States are ‘a complete chaos.’

The US is the worst affected country of the Coronavirus pandemic with 608,377 Cases and over 25 thousand deaths.

Minster of Commerce, Trade and Industry Christopher Yaluma has challenged local entrepreneurs to develop better packaging and branding solutions for their products to compete...