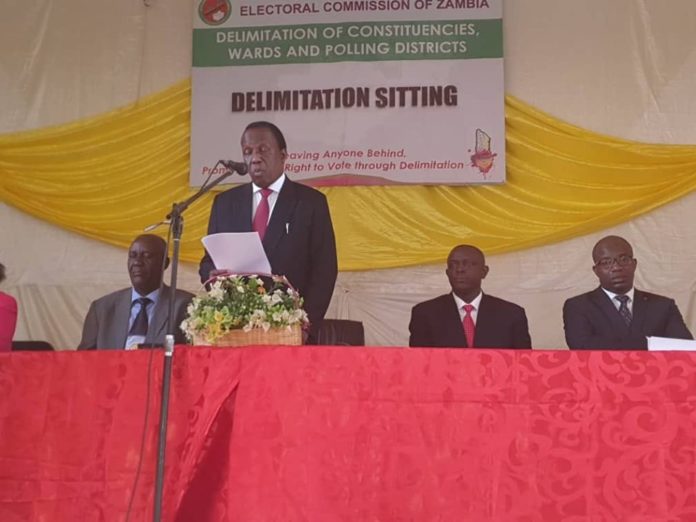 The Electoral Commission of Zambia (ECZ) Chairperson Justice Esau Chulu says the delimitation of constituencies is an important exercise that promotes effective citizen representation and makes electoral services more accessible to the people.

He said the commission has this year embarked on the delimitation of constituencies, wards and polling districts to be conducted from July to November 2019.

Justice Chulu said the exercise will involve various stakeholders to ensure that everyone participates in the process.

“The exercise has been necessitated by several factors which include; an increase in population, the long distances that voters cover to access electoral services, developmental and new settlement patterns among others, ”Justice Chulu said.

He said the law provides that delimitation be conducted at intervals of not more than 10 years.

Justice Chulu revealed that after President Edgar Lungu established 30 more districts across the country in the past 8 years adjustment of electoral boundaries has become a priority.

He said the exercise will ensure that all new districts have at least one constituency as well as the realignment of boundaries of wards and constituencies that may have been affected by the creation of new districts.

“It has come to the attention of the commission that some polling stations are located in places not convenient for conducting elections. Consequently, the Delimitation Exercise will also entail the reallocation of those polling stations more suitable and conducive venue,” justice Chulu said.

He,however, emphasized that the commission will only be able to effect the delimitation of the new constituencies and wards after the amendment of the Constitution and after the Ministry of Local Government has issued a statutory Instrument to provide for the new wards in accordance with the Local Government Act.

Justice Chulu was speaking when he officiated at the Delimitation Sitting in Chipata District on 6th August 2019.

For many years, the African community waited in anticipation for a hero, and the Marvel studios finally gave them one. Black Panther had the...