Lusaka StarService with Excellence
HomeNewsCEHF Hails govt in the south dispiriting unstandardized use of lead in... 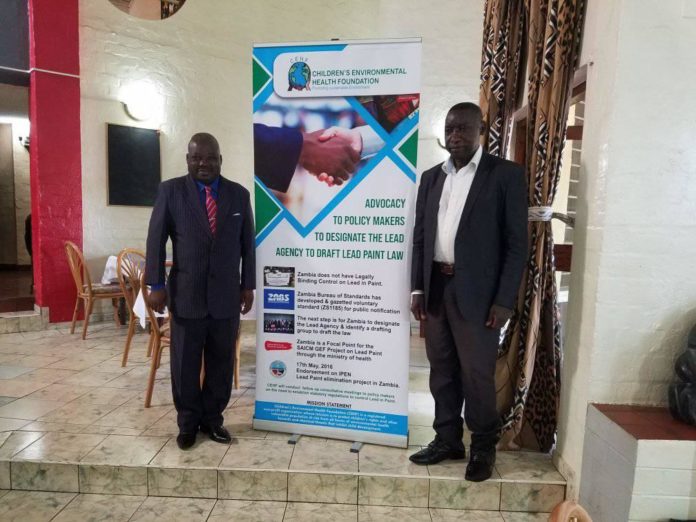 The Children’s Environmental Health Foundation has commended the government in Southern Province over its continued plea against paint industries using high volumes of lead in paint products.

Speaking during the official launch of the International Lead Poisoning Week in Livingstone, Children’s Environmental Health Foundation Chairperson, Michael Musenga stated that the government’s stance on encouraging paint industries to utilize standardized amounts of lead in paint products was a sign that the government was in support of promoting public and environmental health in southern Province.

“We need to have a legally binding law that will regulate paint industries in the production of paint using 90 parts per million which is the safest standard for lead in paint,” he stated.

Mr. Musenga stated that high volumes of lead in paint were hazardous to the health of children, unborn babies, and expectant mothers.

He explained that the symptoms of lead-in paint were, mental dementia in children, irritability, loss of appetite, weight loss, sluggishness and fatigue, abdominal pains, vomiting, constipation, hearing loss, and in severe cases, seizures.

The CEHF chairperson stated that the International Lead Poisoning Week being celebrated under the theme “Working Together for a World Without Lead Paint” was a call to promote the global phase-out of lead in paint through partnerships and support from private and government stakeholders.

“This week of action is an initiative of the Global Alliance to Eliminate Lead Paint (the Lead Paint Alliance), which is jointly led by United Nations Environmental Programme (UNEP) and World Health Organization (WHO),” he explained.

Mr. Musenga stressed that the primary goal of the Alliance is to promote the global phase-out of lead paint through the establishment of appropriate legally binding measures to stop the manufacture, import, export, distribution, sale and use of lead paints in every country.

He added that the International Lead Poisoning Prevention Week was an opportunity to draw attention to the need for action on lead paint and other sources of lead exposure.

Dr. Monze explained that the government had reciprocated the organization’s efforts by gazetting Voluntary paint standards under the Zambia Bureau of Standards which is ZBS 1185.

I am aware that a lead-in-paint study by CEHF and the International Pollutants Elimination Networks (IPEN) revealed that high levels of lead are added to paint and therefore, lead paint is a significant source of exposure especially in children, strong evidence to have the law enacted in Zambia.

The Permanent Secretary of Southern Province expressed that as of 5th June 2021, less than 40% of the 194 World Health Organization member states have put in place legally binding controls or laws to limit lead in paint to 90 parts per million as set by the global alliance to eliminate lead paint.

“The results of the study are a strong justification for Zambia to enact legally binding regulation of standards to limit lead in paint for protection of our children and women of childbearing age,” he said.

FOOTBALL is one sport that has proven to be a great unifier of people from across all races. The sport has successfully managed to unite...