Lusaka StarService with Excellence
HomeFeaturesZAMBIA MY COUNTRY: 55 YEARS OF HISTORY 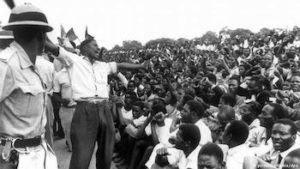 24 October 1964, Zambia gained its independence from Britain. This repaired the invasion of the 1884 Berlin Conference, the climax of white European competition for territory in Africa, a process commonly known as the Scramble for Africa.

With a population of about 18 million, Zambia is located in Southern Africa, east of Angola.

The Scottish explorer David Livingstone came to the area that is now Zambia in 1851 and was the first to see the falls he named Victoria, after Queen Victoria, in 1855.

And in the same year, Northern and Southern Rhodesia, now Zambia and Zimbabwe were proclaimed a British sphere of influence.

The territory was administered by Rhodes’ British South Africa Company, which signed treaties with several African leaders and administered the region and in 1911, the two were joined to form Northern Rhodesia.

Later in 1923, the United Kingdom took over the territory and the administration of Northern Rhodesia was transferred to the British colonial office in 1924 as a protectorate.

During the 1920s and 1930s, advances and discoveries in copper and lead mining spurred development and immigration.

By 1938, it produced 13% of the world’s copper and the sector was immediately monopolized by the Anglo American Corporation (AAC, North-American) and the Rhodesian Selection Trust (RST, South African), which would control the sector till independence.

Finally, in 1953, both Rhodesia’s were joined with Nyasaland (now Malawi) to form the Federation of Rhodesia and Nyasaland.

Northern Rhodesia was the centre of much of the chaos and crisis that characterized the federation in its last years and at the core of the controversy were insistent African demands for greater participation in government and European fears of losing political control.

By 1960, the British Government, in the famous “There is a wind of change blowing through Africa” speech by Prime Minister Harold Macmillan, acknowledged that the days of colonial (or minority) rule on the continent were ending.

Furthermore, on December 31, 1963, the federation was dissolved, and Northern Rhodesia became the Republic of Zambia on October 24, 1964. Kenneth Kaunda became the country’s first president and proclaimed one-party rule.

The people were disappointed by one party rule and the declining economy and several strikes hit the country in 1981.

The government arrested several union leaders, among them Frederick Chiluba.

In 1986 and 1987, protests arose again in Lusaka and the Copperbelt, followed by riots over rising food prices in 1991, in which at least 30 people were killed.

And in the same year the state-owned radio claimed that Kaunda had been removed from office by the army. This was not true, and the coup attempt failed.

Kaunda realized the need for reform and in 1990 lifted the ban on other political parties.

After pressure from the new parties, the referendum was cancelled in favour for direct multiparty election.

In 1991, Fredrick Chiluba, the leader of the MMD, defeated Kaunda. The subsequent vote in 1996 saw obvious harassment of opposition parties, the year Chiluba was re-elected.

In the election of December 27, 2001, Chiluba’s handpicked candidate Levy Mwanawasa was elected president with 29% of the vote; the MMD picked up 68 of 150 seats in the National Assembly.

Levy Mwanawasa died in a Paris hospital after suffering a stroke in June 2008, at the age of 59. He had come to prominence recently for being one of the African leaders most critical of the violence in Zimbabwe and the best President Zambia has ever had.

Thereafter, Rupiah Banda was sworn in as president after being declared the winner in the presidential election in November 2008.

After ten years in opposition, Michael Chilufya Sata defeated Rupiah Bwezani Banda, the incumbent, to win the September 2011 presidential election with a plurality of the vote. He died in London on 28 October 2014, leaving Vice President Guy Scott as Acting President until a presidential by-election was held on 20 January 2015.

Following Sata’s death on October 2014, Lungu was adopted as the candidate of the ruling Patriotic Front in a Convention of the Patriotic Front in Kabwe, for the January 2015 presidential by-election, which was to determine who would serve out the remainder of Sata’s term.

In the election, he narrowly defeated opposition candidate Hakainde Hichilema of the United Party for National Development (UPND) and assumed office on 25 January 2015.

Lungu was elected to a full presidential term in the August 2016 elections and was sworn in on 13 September after narrowly defeating Hichilema who petitioned the election results but were dismissed by the court.