Lusaka StarService with Excellence
HomeEntertainmentMORE TEARGAS OR UNZA EVENT OF THE YEAR? 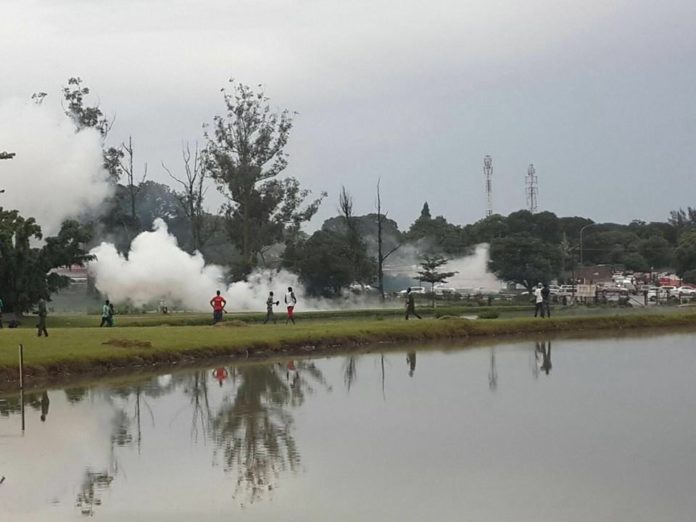 The University of Zambia annual fresher’s bash scheduled to take place on the 22nd of March has raised concerns and panic for some students, as opposed to bringing excitement following last year’s predicament.

A teargas spill, broken bottles and disorder were the highlight of the 2018 fresher’s bash after some students began throwing bottles.

The destructive commotion terribly affected some students causing others to have their properties lost and damaged during the heat of the spill.

This has led some students to feel insecure about attending this year’s bash if safety is not guaranteed.

“While trying to leave the event, we all heard a disturbing sound like a gun and I started to choke on the gas which evoked my asthma and I thought I was going to die, after that incident I am worried about attending this year’s fresher’s bash,” said Mubanga Kamau, a second year student year student.

Another student, Peter Daka expressed dismay regarding the poor security at events hosted at the school.

“As I was trying to escape the gas in the large crowd someone stole my wallet and phone from my pockets, such events should be guarded by security officials but there was none of them on sight,” he explained.

With the upcoming bash drawing closer some of the questions students are asking are whether the student union has put in measures to prevent last year’s disturbances.

Meanwhile,The University of Zambia student union (UNZASU) Minister of Social, Cultural and Mobilisation Kennedy Mwansa has assured students that the team is working hard to ensure everyone has a fun night to remember with no destructions.

“As a union, we have put in measures to ensure safety and order at this year’s bash unlike what occurred last year, the ticket booth will be put away from the entrance so that the queue with people buying tickets and those going in will not clash,” he said.

Mwansa also added that he is aware that the commotion is caused by students that get drunk but the organisers have put in measures to ensure that history does not repeat itself.

“Alcohol will not be sold in bottles, we have communicated to the people selling alcohol to only give cups to customers to prevent bottle breaking by drunk students,” he added.

The attendants should be ready to experience a night to remember with the phenomenal 408 empire sharing the stage with some of Zambia’s leading artists such as Bobby East, Kantu, Chef 187, Kaladoshas, Slap dee, Macky 2 and many more.

President Edgar Lungu has wished Vice President Inonge Wina a quick recovery from COVID-19 to which she tested positive on Tuesday, August 18, 2020. Mr....