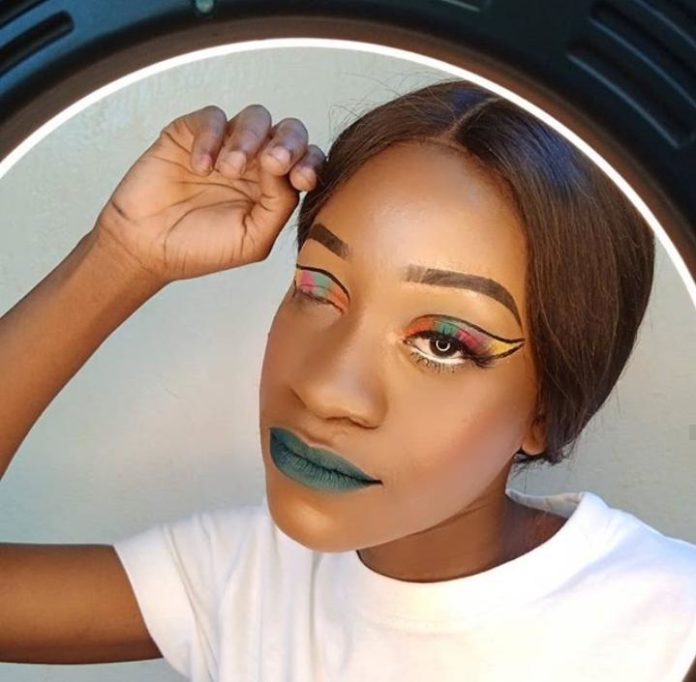 One just needs to take one look around them to see how much makeup has become a part of our culture. From video vixens on social media to photos in magazines, you can see how sometimes a look can be just as important as the message being sent across.

For Felistus Banda, a Livingstone based makeup artist, the journey to success has not been easy and her physical appearance being different as one of her eyes is deformed has not made it any easier.

She began practicing her make up skills on herself in 2016 and it was only until 2018 that she started doing it professionally after completing her cosmetology.

For Felistus, it was more of a passion than a money making venture.

I was very inspired by how my older siblings and mother got to do their faces, thereafter, I took it upon myself to also start and I surprisingly got to do better than them,

As a start-up make up artist, she gets a lot of comments from people with mixed feelings as they tend to believe that someone like her should be confined to a corner feeling pity for themselves.

I think it shocks people to see a confident person like myself wanting to make a living and also being passionate about makeup, one suddenly develops thick skin for negative comments as time goes by because people will always talk no matter what and their opinion will not in any way make me a living,

Almost every person that has some sort of make up done wishes to illuminate their beauty and gain confidence in themselves so having a makeup artist push boundaries confidently gives an air of self appreciation and trust in Felistus.

In her interview with the Lusaka Star magazine, she expressed ho it has really been a miracle looking at how her Instagram following has grown after joining in late 2019.

I didn’t know what Instagram was all about and my older sibling was the one that encouraged me to have an Instagram page,

With a character as strong as Felistus, you would wonder what her source of strength and drive is but she did not hesitate to share that with us. she shared that she has been getting massive support especially from her family from the time that she made it known that she wants to be a makeup artist.

Before being a make up artist, she was a social worker who worked for various organisations and her main focus was HIV/AIDS, mainly focusing on young people and doing sensitization programs.

Felistus is a clear picture in the lesson of ubuntu, she has challenged social norms despite her physical difference and still embodied youth empowerment.

MANY people complain of busy schedules that sometimes they even to miss appointments. But others, workloads have never been a problem. They seem...