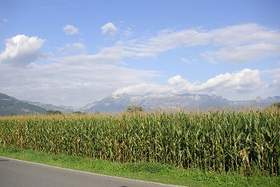 Bwechanetu Women’s Club (BWC) Chairperson Salome Sibanda said farmers did not understand the Electronic-Voucher system as it was not user friendly.

Mrs Sibanda who is also a farmer in Kabwanga area added that most farmers feared that their 2015/2016 farm produce would be adversely affected due to lack of understanding of the Electronic- Voucher system.

“As farmers in Mumbwa District, our fear is that our produce of the 2015/2016 farming season will be affected as we can not understand the E-Voucher system,” she said.

She explained that farmers on the E-Voucher would also face a lot of challenges in accessing inputs because the prices of inputs in approved Agro-dealers and Input suppliers continued to increase due to the falling Kwacha.

Mrs Sibanda wondered why Mumbwa was the only District off the line of rail being piloted on E-Voucher out of 13 Districts of which the remaining 12 are in the urban.

“The other problem we have is that this E-Voucher card is valid upto 30th November, 2015. But to date, none has been activated. And farmers need to deposit the K400 at ZANACO in Lusaka,” she lamented.

Mrs Sibanda, however, said farmers in other districts who used conversional methods would not be affected as they would get full farming packs.
She said the packs will comprise of two Urea and two D compound fertilizer plus a 10 kg seed at only K1, 400.


Meanwhile, Acting District Agricultural Coordinator Joseph Hamboote said the programme is meant to make farmers diversify from depending on maize only.


Mr Hamboote said a total of 16,393 farmers out of 35,000 are expected to benefit from the Programme although only 16 co-operatives out of 813 had been given authority by his office to deposit the money to start accessing the inputs.


“The challenge we are facing is  the E-voucher cards are issued by the Zambia National Farmers Union (ZNFU) where it has been discovered that some farmers’ cards are missing while others have some errors. And we do not know when the problems will be rectified,” he said.


He added that his officers were on the ground sensitizing farmers on how the programme would be implemented during this farming season.


And ZNFU Western Region Manager Emmanuel Sinyangwe said his organisation was on course to complete the process of issuing cards to farmers.


Mr Sinyangwe, however, said the issue prices by Agro dealers was a matter of policy as prices were determined by demand and supply.

The Zambia Rugby Union (ZRU) has expressed confidence in the Zambia National Rugby Women’s team that will play Namibia in a rankings game this...