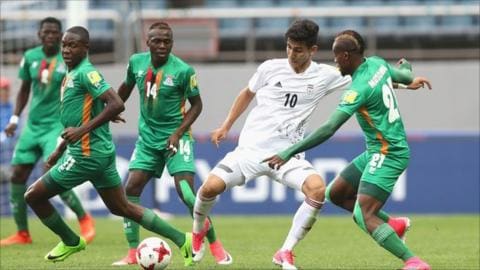 The Zambia Under 20 men’s national soccer team reversed a 2 nil deficit  to beat Iran 4-2 in a  dramatic comeback to  qualify to round 16 at the ongoing Korea FIFA under 20 World cup.

The four goals which  were scored in a space of 17 minutes by Fashion Sakala, Enock Mwepu, Emmanuel Banda and Patson Daka,  ensured that the Chipolopopolo boys cemented thier spot in the last 16 and in so doing became the first team to qualify to round 16.

The African champions went into the half time  break one nil down after Iranian striker Reza Shekari capitalised on a poor clearance by goalkeeper Mangani Banda to put his team in the lead.

Second half substitute Patson Daka who replaced Conlyde Luchanga brought some light to the team but his efforts resulted into a spot kick when he clattered  into the Iranian captain inside the the 18 yard box with the referee pointing to the spot kick.

Reza Shekari stepped up to convert the penalty kick in the 47th minute sending Mangani Banda the wrong way to record his second goal of the day.

Six minutes later after Iran took the 2 nil lead ,Solomon Sakala’s  chipped a delightful long range pass to Fashion Sakala who made no mistake in converting his effort for the African champions. Enock ‘computer’ Mwepu equalized  in the 58th minute when he was set up by a pass from  Emmanuel Banda.

Zambia took the lead for the first time in the match through Emmanuel Banda’s goal in the 64th minute before FC Liefering striker Patson Daka added a fourth in the 70th minute.

Meanwhile soccer fans in Lusaka have expressed happiness over the victory in today’s match.
“I feel very excited because people around the world have come to recognize Zambia. I am very proud have continued with the morale since winning the African title,” said Matildah Chali one of the soccer fans.

Another soccer fan Melody Chileshe said that the dramatic comeback by the team has shown “determination and hard work.”

And James Sakala has congratulated the team despite a poor first half showing from the Beston Chamabeshi lead team.

In 2013 a new treaty, the Minamata Convention on Mercury was adopted by a Global Community including Zambia under the auspices of the United...