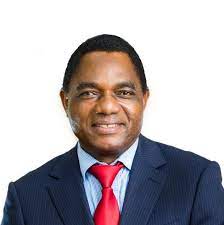 President Hakainde Hichilema has attributed the escalating cost of living in the country to poor economic policies.

Speaking when he addressed the European Union Parliament in Brussels, Belgium, President Hichilema said restoring Zambia’s economy will be the main marker for his Administration’s performance.

“Poor economic policies have caused a downward trajectory in the country’s economy and has resulted in the rising costs of goods and services such as fuel,” he said.

President Hichilema added that as a result of this, government has come up with incentives to help cushion the effects of the high cost of living being experienced in the country.

“This is one of the reasons the UPND Administration made primary and secondary education free and increased the Constituency Development Fund-CDF despite treasury constraints,” he said.

President Hichilema added that his Administration is committed to making Zambia a more industrious country over the coming years because of its resource potential and available global market for its goods and services.

“Small and Medium Enterprises (SMEs) are crucial to us and we want to make sure they become the building block for Zambia’s economic revival,” he said.

And President Hichilema said he looks forward to working with the European Union in helping SMEs access global industrial packages which will help them grow.
” This will lead to increased industrialization, agricultural production, manufacturing, trade and sustainable energy sources.”

” It is also important to note that the just ended first ever EU-Zambia Business Forum will immensely contribute to the growth Zambia’s economy,” President Hichilema added.

The head of state further stated that if properly developed, Zambia’s agricultural sector has potential to help in addressing the food security crisis the world is currently facing.

“As the world faces critical shortages of key agricultural produce, and as we witness the devastating effects of food insecurity in all regions of Africa and other parts of the world, Zambia is well suited and aims to be a major contributor to addressing this crisis,” he said.

The President disclosed that he was pleased to note that Zambia and the EU have increasingly collaborated in agriculture endeavours and urged more collaboration in the respective sector.

He said it is crucial that Zambia rapidly scales up it’s production of food commodities in order to serve the national, regional and global market.

“As a government, we understand the need to scale up food production and have placed it as one of the cornerstones of our economic recovery plan as it is the best way of creating meaningful employment and diversifying Zambia’s economy,” President Hichilema stated.