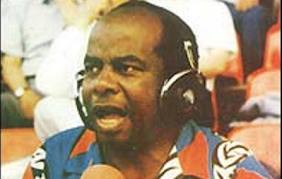 I remember him when he got discharged from the hospital after the Gabon disaster shock he suffered, telling a journalist, I Dennis Liwewe was not going to die in that Gabon air crash and will not die soon, till I see Chipolopolo life the AFCON.

says Joseph Banda, a football fan based in Lusaka.

Later in 2012 when Zambia won the AFCON, in his fragile condition, with a big smile, he said now I can go and rest in peace.

The undisputed king of the commentary box, whose words brought the game into the living rooms each time Zambia played a game, stands among the greatest of the beautiful game.

He made us watch football on radio with his accurate description of situation on the football pitch. With his skills, he contributed to people liking football, may his soul continue resting in eternal peace.

It was not uncommon to trade the television commentary for Liwewe’s signature voice on the radio, something that sealed his distinction forever.

He was very easily the 12th player each time the KK11, later to be christened Chipolopolo, took to the field across the globe.

Rest in peace, Dennis! What are Your memories of the late Dennis Liwewe?

Chawama and George compounds sensitised on water and sanitation