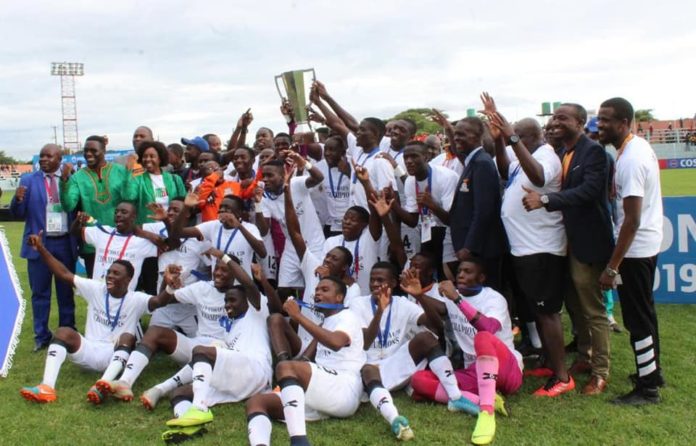 Zambia Under-20 men’s football team are COSAFA champions after defeating former Champions South Africa 3-0 in a mouthwatering final, which was played at the Nkoloma Stadium in Lusaka today.

Zambia created a couple of chances in the first half  with the closest coming from Francisco Mwepu in the 30th minute whose  header was saved by South African goalkeeper Bontle Molefe.

It did not take more than five minutes when Zambia opened the scoring in the 39th minute through an acrobatic finish by Jonathan Munalula.

Francisco Mwepu then provided the other goal for Oswald Mutapa’s coached side in the 42nd minute to double the score line before he was withdrawn in the in 77th minute for Ricky Banda.

The hosts sealed their win when Jonathan Munalula registered his second goal of the game with a bullet header to make it 3-0 in favor of the hosts.

The two-goal hero was then substituted for Elliot Kampukesa three minutes before full-time.

Meanwhile, Zambian player Patrick Gondwe was awarded player of the tournament and has been given an opportunity to trial with Spanish division two side FC Numancia.

Zambia started their COSAFA campaign by recording a 5-0 victory over Botswana,  2-0 win   against Comoros  and a 2-1 victory over Malawi in their last group stage game.

In the semi- final, Zambia played Angola whom they beat 3-0 and finalized their campaign with a 3-0 victory over South Africa in today’s final match.