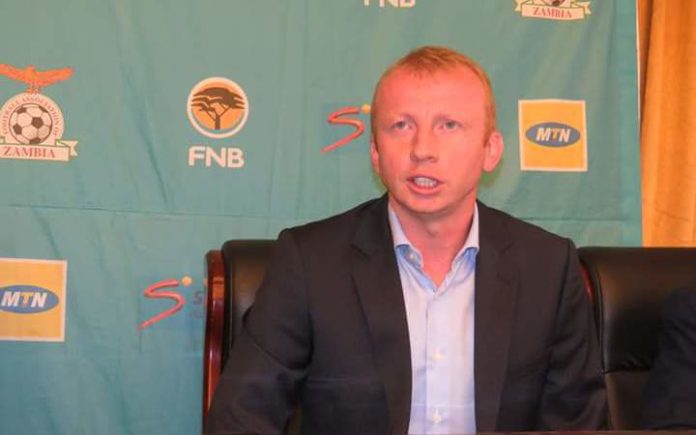 Vandenbroek has recalled the TP Mazembe trio of Rainford Kalaba, Kabaso Chongo and Nathan Sinkala who have not played for the National team for some time.

The coach has also summoned Armenian based forward Lubambo Musonda and Israel based defender Emmanuel Mbola who equally have not featured for the squad in a long time.

And speaking during the unveiling of the squad, Vandenbroek said every Zambian player is eligible for selection as long as they are willing to play for the country.

Vandenbroek  further said that the tie against Namibia is a must win match for his team if they are to stand a chance of qualifying to Cameroon 2019, the team having previously lost to Mozambique before he took over.

“…it is a very important game for both of us. It is a must win for both. We are bopth at zero points, so if we want to have a chance to qualify, we both have to win,” Vandenbroek said.

Zambia faces Nambia on 8th September in Windhoek in the second round of AFCON 2019 qualifiers in what will be Vandenbroek’s first official assignment since taking over the team.

Zambia and Nambia are currently sharing the bottom position in group K with zero points while Guinea Bissau and Nambia are both on three points having won their opening fixtures.

The Chipolopolo are expected to enter residential camp on 30th August in Lusaka, while the foreign based players are expected to join the team starting 1st September 2018.

Coffin sellers in Lusaka have expressed displeasure at Lusaka Mayor Miles Sampa's directive that they should stop trading from the University Teaching Hospital. The order...

UNZA Alumni: Where art thou?