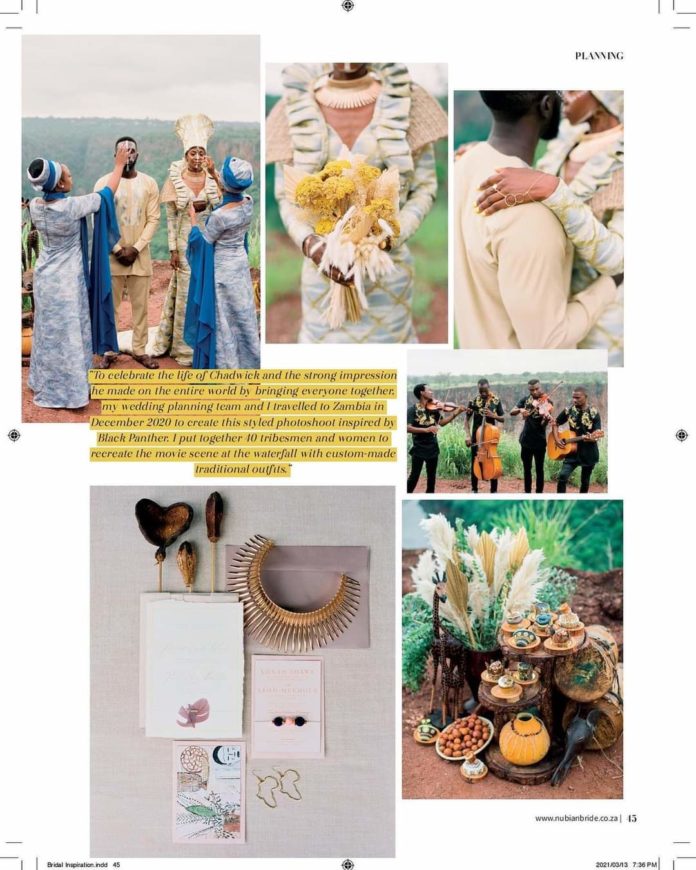 The American superhero film Black Panther, which premiered in 2018 inspired many and reminded Africans of their roots and culture.

The movie influenced fashion and music, and became an overnight sensation as it celebrates culture from its African roots to modern day American hip-hop, showing what it is to be black both in Africa and America.

While other fans were inspired to wear African prints, Mwai Yeboah, a wedding planner, was inspired to plan a Black Panther wedding.

When Chadwick passed away, I related to his story because I am a three-time cancer survivor and I do understand what it is to work and people don’t know that you’re sick because you want your work to tell the story.

The wedding planner explained that how the Black Panther star battled cancer privately until his death with no one knowing a single thing really affected her.

She added that she understood what it felt like to work hard but close the door behind to be sick and then go out and work again.

Mwai said she connected to Chadwick’s story, and what really inspired her was how after the Black Panther movie came out, Africans were proud to be African; to have their unique accents and also proud to wear their traditional African attires.

When Mwai started researching, she said she realised that the Black Panther filmmakers did not just focus on making an ordinary movie out of their own knowledge about Africa, but actually travelled to the continent to do their research and selected different traditions and languages such as Xhosa and Swahili, among others.

Because we don’t research, we don’t read, we just enjoy and miss out on an opportunity to brag about it,

The wedding planner added that when she read about how the movie was thought out in terms of the scenes, she noticed that some of the scenes were done at the Victoria Falls in Zambia.

I was thinking, there’s no way I’m finding out about this and God is telling me to just sit down, I’m going to recreate those scenes, but in a love scene and also pay respect to the movie,

Mwai’s vision was to recreate the fight challenge scene into a wedding ceremony where the bride and groom would be standing at the head of the waterfalls surrounded by different African nations.

She said she wanted the groom to have the same painted marks on his face just like T’Challa’s, the titular character in the movie, while the bride would be wearing a Maasai marriage necklace commonly worn to signify a new relationship like an engagement.

Mwai added that the costumes were custom made, each representing different nations of Africa and their heritage.

I wanted to capture the strength of African women and celebrate blackness by taking the scene of the female warriors and recreating it with women with spears at Tonga Bezi Lodge to celebrate strength, beauty and power that African women possess,

The wedding planner explained that she brought traditional troops together to represent a total of 18 cultures including the Ngoni, Zulu and Maasai, from the outfits to smallest details such as the bracelets which she got from Ethiopia, all representing how Africans are so alike yet unique in their different beliefs and cultures.

People don’t see because they say the work is nice but don’t realise I’m telling a story about different African traditions, the Zambian tradition. And the water scene for me was like if Black Panther can do it, we are going to shoot in the water as well,

The wedding planner was also determined to shoot a video that would preserve the vision she wanted to carry out.

She said putting this together took eight weeks, and travelling through the waterfalls was not easy because her and her crew had to walk through the water at the peak of the falls with the local guides.

We shot everything within three days and it was raining so we put everyone together and had a [duty] rota showing where we would do each scene,

Mwai says her team had to adhere to COVID-19 guidelines, hence everyone was put in a bubble while working.

She added that throughout the process, she learnt that if a person is determined to do something, they will find a way and if their vision is inspiring, their team will believe in them to make it come to life.

I wanted to showcase our tradition, but also wanted to show the authenticity of when you embrace your culture without putting the whiteness in it and see how beautiful it is,

She explained that it is not about how much one has to spend, but about the detail and emotional story, adding that it is best to know what emotions you want to invoke when you plan an event.

For me, the emotion with the Black Panther wedding was a connection to our cultural heritage and that’s the emotion I wanted the video to showcase so that you do not only focus on one thing but everything,

She said the emotion should hit your soul so that you can really fall in love with our African culture.

Ministry of Finance says Zambia’s economic growth is projected to slow down in 2019 due to adverse weather conditions negatively impacting the agriculture and...