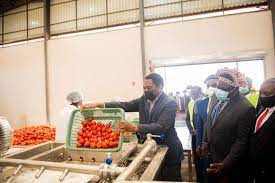 In an interview with Lusaka Star, SAFADA Executive Director Boyd Moobwe said farmers across the country should therefore take advantage of the opportunity that the factory has accorded them and produce more fruits.

Meanwhile, a Lusaka based farmer, Ahmed Phiri said the Kalene Hills Fruit Factory will encourage farmers to grow fruits as it provides a ready market for their produce.

He added that the factory will also add value to fruits such as tomatoes and mangoes which have been going to waste at markets.

”Government should also extend this initiative to other crops in order to increase value to farm produce which in most cases get wasted as witnessed at Soweto market, Phiri said.

Designer and founder of Fashion Business ‘Vhasu House of Fashion’ Memory Zulu has urged government to build a fashion and designing school that will...