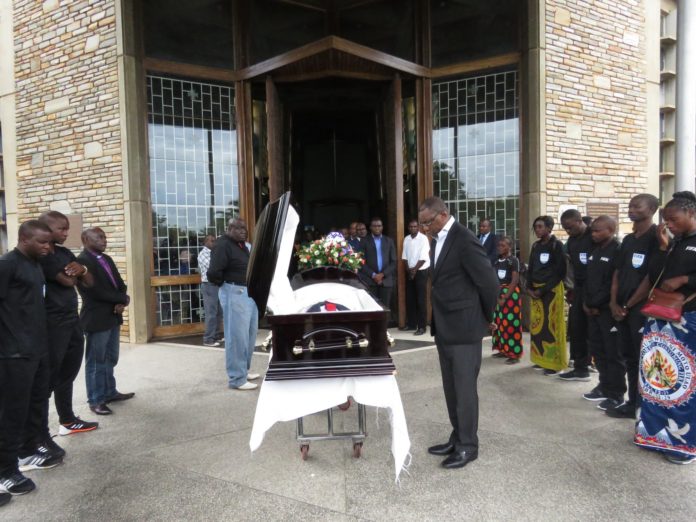 Hundreds of people gathered at the Anglican Cathedral of the Holy Cross Thursday morning to bid farewell to Football Association of Zambia (FAZ) League Manager Katongo Kabungo, who died on fEBRUARY 7, 2020.

Kabungo, who was known by his close associates as KK was put to rest recently at Leopards Hill Memorial Park.

Kamanga described Kabungo as an exemplary administrator whom the association had regularly counted on in times of football controversy.

He was a well-respected instructor under COSAFA, CAF and FIFA

legend, icon, pillar, mentor and a father to all the referees.

He said that few referees in the region that had reached the highest point in refereeing had passed through Kabungo’s hands.
Warima also said Kabungo was a football administrator par excellence who was also selfless and well respected by all the referees.

And Simango said Kabungo’s craft had earned his respect outside the boundaries of Zambia.

On behalf of president of COSAFA Dr Phillip Chiyangwa, we are here to mourn a great man. We mourn with the family and Zambians. Thanks for the life of Mr KK, he gave everything to the game. We are here to say thank you.

Meanwhile Mulenga who represented government said Kabungo was always a resourceful person in helping draft regulations for any tournament that was held in Zambia.

Kabungo served as Referees Manager from 2010 to 2016 when he was elevated to acting General Secretary.

He was later appointed League Manager, a position he held until his death.

He started outs as a referee in 1973 and was appointed to the FIFA panel in 1979. He was appointed as a CAF Referees Instructor in 1997.

Impact Capital Africa (ICA) has expressed interest in bringing 40 organisations to invest in Zambian businesses to help create more jobs in the country. In...