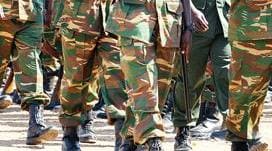 The Ministry of Defence has said it is set to deploy more Zambia Air force (ZAF) officers from the aviation unit for peace keeping missions .

The minister stated that former secretary general for United Nations, Ban-ki Moon requested Zambia to send more officers to be deployed in either Mali or Central African countries.

Mr. Chama said Zambia will distribute men and women in the air force to do air cover and food delivery to the affected war zone areas within this year.

“Zambia is known for peace hence the need to make sure that other countries also have peace to continue economic development through trade,” he said.

The minister went on to say that Zambia currently contributes to six peace keeping missions; in the central African Republic, South Sudan, The Democratic Republic Of the Congo, Darfur, Abyei and Liberia.

He added that Zambians reflect on the sacrifices made by those trying to keep peace.

He said the deployed men and women try to keep peace in circumstances where there has been a need to make peace and end war.

Mr. Chama said the International Peace Keepers day is meant to pay tribute to people around the world who volunteered to serve in international peace keeping operations.

“We honor over 3500 lives around the world and 76 Zambian lives given in more than 10 different peacekeeping missions,” he said.

Speaking at the same event, the representative of the UN resident coordinator, Ms. Medhin Tsehaiu said that sustainable development agenda 2030 recognizes that there can be no peace without security and no security without development.

She said that all UN missions have the same goals to save lives, protect people, to set the stage for peace.

“The agenda is intended to be short term investments that provide long-term dividends by creating the time and space for national processes to unfold,” she said.

Minister of Labour and Social Security  Joyce Nonde Simukoko has called on the private sector to comply to the adjustments contained in the new...