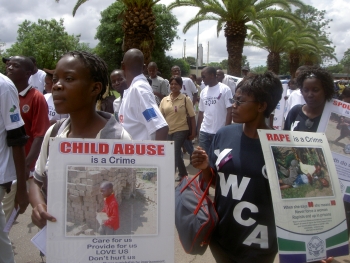 Women for Change (WfC) has expressed concern over the increased number of child defilement and rape cases recorded in the country recently.

Speaking in an interview with Lusaka Star, WfC Executive Director Lumba Siyanga said the organization will not tolerate any case of child defilement or rape, and has urged Zambians to join in the fight against such vices.

As an organization that is concerned with the well-being of females, we are saddened to note the increasing number of child defilement and rape cases. We strongly condemn the act and call for all measures to be put in place in order curb it,

The WfC Executive Director added that the effects of defilement and rape are long-term and girls have been the most vulnerable to them.

She further said there is need for offenders to be brought to book as this will not only ensure awareness and sensitization but also deter would-be offenders.

Ms. Siyanga said the issue of child defilement cannot be fought by one institution, hence the need to put efforts together in fighting the scourge.

We need concerted efforts in this fight. We call upon the government, women lobby groups, parents, stakeholders and every citizen to put efforts together in fighting this act. This war cannot be fought by one organization,

Meanwhile, Child Activist Rebecca Mulenga says any form of Gender Based Violence (GBV) should not be tolerated in the country.

Mrs. Mulenga told the Lusaka Star that her heart is heavy and saddened every time she hears stories of a child being defiled, raped or abused in any way.

She explained that children, especially young girls, need to be protected at all times, more so because they are the most vulnerable to abuse.

Mrs. Mulenga added that there is need for massive sensitization, especially of males in order to educate them on the dire effects of any form of abuse.

She further said some men who cite indecent dressing as a reason for sexually harassing women need psychological help, as babies are also reported to be abused.

There should be nothing like dressing or dress code of females is what causes men to rape or defile them. We have had reports of nine-month old babies being sexually abused.

Stanbic Bank (Zambia) Limited says it is prepared to work with the Zambia Association of Manufacturers (ZAM), and other stakeholders to accelerate the country’s...