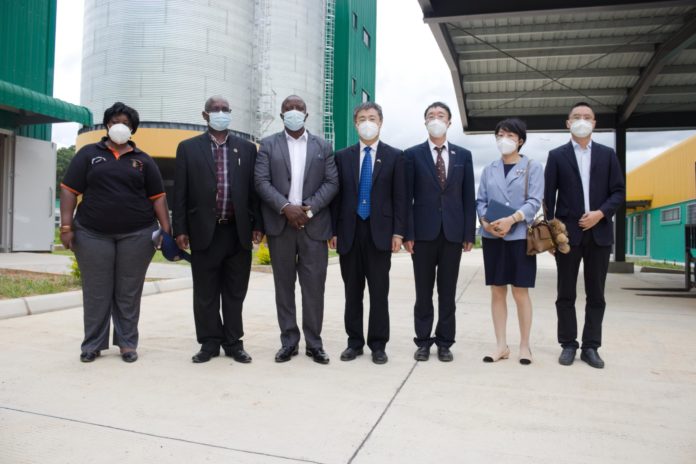 Government has applauded the University of Zambia (UNZA) for partnering with the Chinese government to set up a milling plant in Chongwe district.

Speaking when he toured the UNZA-run  milling plant, yesterday, Minister of Foreign Affairs and International Cooperation Stanley Kakubo urged UNZA management to ensure that they  increase the production capacity of the plant so that maize can be exported to neighbouring countries.

We must not forget that we must not produce only for the country, but for the region as well. This will help keep the region food secure in cases of drought of any natural disasters,

He said that the setting up of the milling plant will not only help  UNZA students in their practical studies, but also create Jobs which will advance government’s agenda of industrialisation.

The Kapiri Mposhi law maker further thanked the Peoples’ Republic of China for its continued support to Zambia in different sectors of the economy.

Meanwhile, University of Zambia Vice Chancellor Professor Luke Mumba said  the milling plant will help train students from the School of Agriculture among other schools at the University.

The milling plant will also be used as a source of revenue generation for the University, and this will go a long way in reducing its dependence on government,

The vice-chancellor added that UNZA will soon work on introducing its own brand for the milling plant which has the capacity to produce 800 bags of mealie meal per day.

And Chinese Ambassador to Zambia Li Jie said the milling plant will help in the supply of Zambia’s staple food and reduce the risk of food security.

We call on the government to come on board in order to ensure that this  milling plant is put to effective use,

The Chinese government has so far set up three milling plants in Monze, Mpika and Lusaka since 2019.