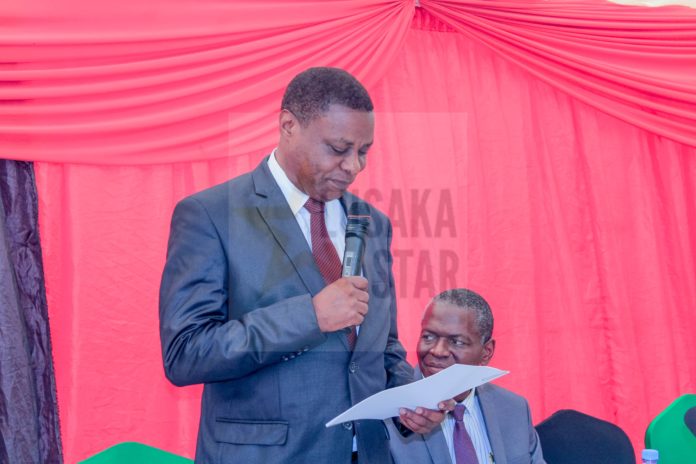 University of Zambia (UNZA) in conjunction with the Ministry of Health has inducted 395 graduates into different health professions.

Speaking during the Induction Ceremony at Ridgeway campus, acting Deputy Vice Chancellor Dr. Michael Mulenga said that out of the total of 395 graduates, 126 are medical doctors, 58 are pharmacists, 100 are nurses, 68 are biomedical scientists, 30 are environmental health specialists and 13 are physiotherapists.

Dr. Mulenga said that this year’s 395 graduates are ready to take up teaching positions in both public and private Schools of Nursing, following the increased demand for nursing teachers in both private and newly opened government Schools of Medicine.

The University is also proud to mention that this year’s 68 Biomedical Scientists have been fully exposed to different laboratories during their five years of training from which they have gained the necessary competence.

Dr. Mulenga stated that with the increase of non-communicable diseases, the University is excited that a new programme, ‘Bachelor of Science in Nursing Ecology’ was introduced this academic year in the School of Nursing.

Another programme, which is a Bachelor of Science in Public Health Nursing, is yet to be commenced.

He added that this in turn will increase the number of graduating nurses and midwives in the country.

Dr. Mulenga said however, that despite graduating so many students, UNZA Ridgeway campus was faced with a number of challenges.

He said that most of these challenges are mainly teaching space, training equipment and inadequate funding to support training.

The schools however intend to continue increasing the output of workers and health care services through increased student environments.

He further said that the University extends its gratitude to the government for the positive response to its needs for infrastructure through the Ministry of Higher Education.

Furthermore, Dean of the School of Medicine Dr. Elliot Kafumukache congratulated the inducted graduates from Ridgway campus and welcomed them into the medical profession.

He said that they should be aware that they are on longer students and should therefore carry themselves professionally.

Eight soccer teams are set to battle for the six hundred thousand kwacha pumped into the 2020/2021 ABSA Cup. The MTN/FAZ Super League will see...