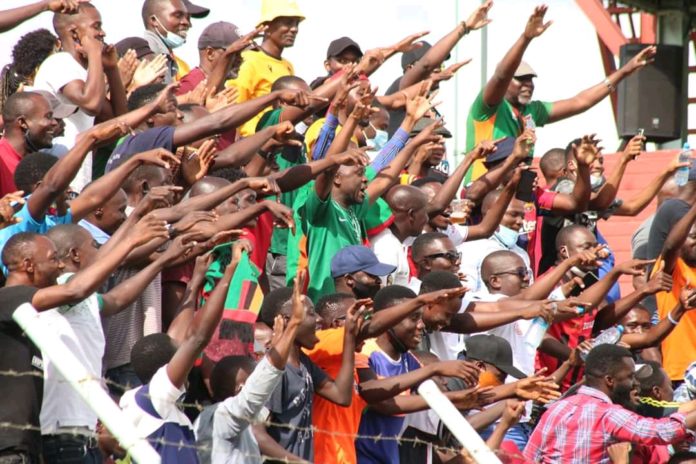 The Zambia Sports Fans Association says the move by government to ban fans in the stadia in all MTN/FAZ league games is timely but selective.

Association Patron Peter Makembo says the directive should have tackled community football as they are the culprits of not following the stipulated guidelines.

Makembo said he will engage the Ministry of Sport, Youth and Child Development to see how government aims to incorporate the communities who are at high risk of contracting the virus.

Meanwhile,  the Football Association of Zambia (FAZ) says it will fully comply with government’s directive to ban spectators in stadia until further notice.

FAZ General Secretary Adrian Kashala said the health of various stakeholders in the game are of paramount importance.

The health of players, fans officials and other stakeholders are a priority and as the association we will prohibit fans for the game to continue under the new normal,

He adds that FAZ has appealed to clubs to take responsibility and comply with stipulated guidelines.

…follow all COVID-19 health guidelines such as putting in place hand washing facilities, sanitizing, social distancing and masking up without fail,

Kashala has since implored fans to refrain from forcing their way into stadia.

This is according to a statement made available to the media by FAZ Communications Manager Frank Mushanga.

Zambia has recorded 14 percent increase in child defilement cases in its third quarter of 2019 as compared to the same period last...