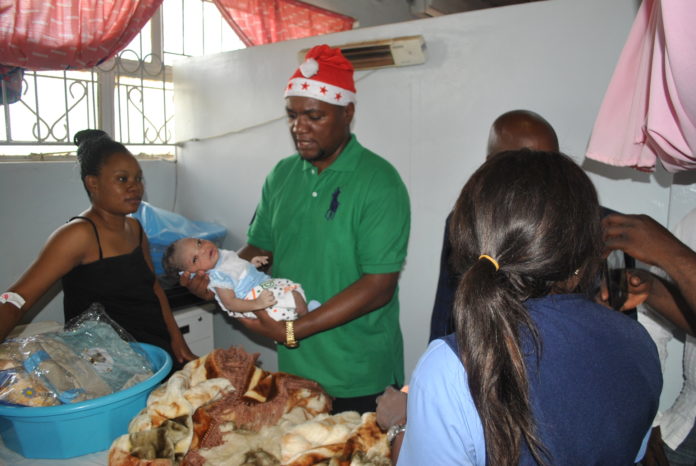 LUSAKA mayor Miles Sampa says people should not mistake his festive season generosity for political ambitions because he was satisfied with the position as mayor .

Mr. Sampa was reacting to social media comments suggesting that he was taking advantage of his position of mayor to campaign for a higher position.

He said he was determined to give to the vulnerable in society whatever the council could afford and no amount of negative publicity would deter him from doing so.

Mr Sampa said people should realize that the festive season was a time to give out to the less privileged in society.

“Am happy and satisfied with the position I am having and there is nothing extra ordinary about visiting Christmas babies because I am not the first one to do this,” Mr. Sampa said.

The Mayor was speaking during the presentation of Christmas gifts to 7 new born babies at Kalingalinga and Mtendere Clinics on Tuesday.

Mr. Sampa had also made donations to inmates at Chimbokaila prison as well as to street kids in Lusaka worth K10, 000 kwacha as part of Christmas celebration.

The Mayor also called on all those with financial capabilities to emulate his actions and give out to the needy in Lusaka and other surrounding areas.

Ms. Banda said presenting gifts born on Christmas Day was a tradition that every Christian should respect as it has been a long standing festive tradition

She said this in a statement availed to the Lusaka Star after presenting gifts to seven babies born on Christmas at Petauke District Hospital on Tuesday.

Earlier on, Petauke District Hospital Medical Director, Allan Bondo said the hospital had recorded its first delivery at 24:55 hours on Tuesday while the last of the seven delivery happened around 7 hours.

Mr. Bondo said six out of the seven babies were boys while one was a girl.

Village banking has become a major source of income for many people, particularly women in many parts of the country. Women come together to form...