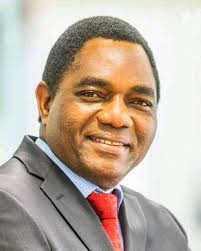 Minister of Education has disclosed that President Hakainde Hichilema has donated three industrial boreholes to the University of Zambia (UNZA).

Speaking during the announcement of the 2021 Grade 12 examination results, today, Douglas Syakalima further said that President Hichilema has pledged to renovate the hostel block that he occupied when he was at UNZA.

President Hichilema graduated at UNZA with a degree in Economics and Business Administration in 1986 and stayed in Tiyende Pamodzi (TP) block 5, room 11.

They just gave me the quotations recently and I just sent them to State House, so we are preparing for that,

Syakalima further said that government ensured that for the first time in 10 years, the monthly grant for the University of Zambia was released before the 25th of December.

Go and ask people, every December they used to be protests over the nonpayment of salaries in the University of Zambia. For 10 years. Last month, we gave them two grants for November and December, and for the first time they celebrated Christmas with a salary. They never used to get that for the past 10 years.

Every month we are on schedule since President Hakainde took over office, they(UNZA) have been paid every month. Have you ever heard the University of Zambia complain over salaries? It has finished,

The minister added that the timely release of monthly grants has been applauded by management in public universities as it was not the case under the previous government.

Just a  day before yesterday, Copperbelt University acting Vice-Chancellor was  telling me that they are shocked at the way we have maintained these universities as they received their grants earlier than they have been receiving the grants,

Syakalima  has since urged UNZA to be patient as his ministry will ensure that legacy challenges that the University has grappled with for many years are resolved.

The University of Zambia Caritas chapter has commended the ruling by the Constitutional Court that ministers should pay back salaries and allowances they accrued...