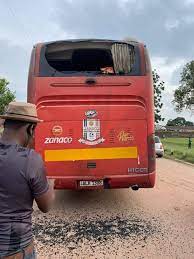 The Football Association of Zambia (FAZ) has disclosed that it has drafted a code of conduct that will enable its secretariat to immediately sanction clubs and other football  stakeholders engaged in violent conduct during matches.

In an interview with Lusaka star, FAZ Secretary General Adrian Kashala said the association has in the past delayed to sanction erring football stakeholders as that is the responsibility of the FAZ disciplinary committee, which is an independent judicial body operating outside the jurisdiction of the secretariat.

When incidences  of violence happen, we have judicial bodies that look into that, as secretariat does not have power to proceed and met out  sanctions. So we have come up with a code of conduct, which once approved , will give secretariat powers to immediately sanction clubs,

Kashala also cautioned clubs to ensure that their fans do not engage in violent conduct as it is clubs that suffer the consequences of the fans’ actions.

On saturday, Konkola Blades fans attacked the team bus of Zanaco football club leading to the shattering of its rear windscreen.

Meanwhile, Kashala says FAZ has noted with regret that the continued clash of kits between some teams in the MTN Super league is as a result of unfounded beliefs by clubs that the use of a particular kit will make the team win or lose a match.

We have also realised that clubs want to believe that using a certain jersey colour will make the team win or lose despite knowing the rules involving the use of kits,

He further added that going forward, FAZ will not condone the clash of  kits between teams as the MTN  Super League is a professional and serious league.

This was a similar case two weeks ago when Nkana football club were forced to wear a borrowed green jersey after their away jersey clashed with Red Arrows’ home kit.

University of Zambia Students Union (UNZASU) has disclosed that it made a profit of K 1,050.00 from last month’s freshers bash which attracted an...